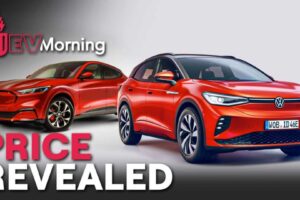 Good morning, good afternoon, good night…hello wherever you are in the world. We’ve another busy EV Morning for you so grab a cup of whatever it is you drink and let’s get cracking!

We’re coming back down to earth from space now and landing in India. Why? Well, that’s because Ola have secured India’s largest-ever long-term debt financing deal worth $100m. EV fans may have heard of the Etergo AppScooter. This funding will be invested in the Future Factory being built in India to manufacture the scooter on a gigantic scale.

India is a hotbed of 2 wheelers, which largely bellow some nasty fumes out the back. Creating a manufacturing hub like this will go a long way to easing the air pollution caused by these scooters. Ola claims that they will be able to produce 10 million of these scooters per year, and plan to hit international markets in 2022.

We’re staying in Asia for our next story and tapping into some Tesla news. Yes, they have finally opened their first Superchargers stations in SE Asia. Now, we all know that Tesla has rolled out plenty of stations in North America, Europe and China, but there’s also plenty of black spots littered around the world.

So Tesla Superchargers have landed in Singapore. They are located at Orchard Central, and they’ve installed three V3 stalls. The V3 stalls are capable of charging at 250kW each and are available 24/7. It’s about as small as Supercharger stations go, but it’s another step in the right direction for Tesla’s international expansion.

We’re heading to the UK next and we’re going to look at some pricing. We now know how much the iD.4 GTX will cost as well as the Ford Mach e GT. And it makes an interesting comparison. The ID.4 GTX will start from £48,500, and is nicely specced. But if you want to come up with the extra cash for the Max version then you’re going to part with at least £55,500! Now you do get some extras like the heat pump and panoramic sunroof, but that’s a lot of money!

Moving on to the Mach-e, and let’s just get it out of the way…this is a good bit more expensive…but you get a good bit more for your money. The Mach-e starts at about £67,000, so that’s an extra 12 grand straight away. But we’re talking about a GT vs a GTX here so performance is a big factor. There’s a combined 480hp in the Mach-e and it gets your 0-100 km/h time down from the ID.4’s 6.2s to 3.7s. And in terms of range, the Mach-e has a bigger battery with the 88kWh extended range version that gets you a WLTP range of just over 300miles, which is fractionally bigger than the VW.

Last up today, we’re celebrating a mini-milestone for Porsche. It’s a busy time for the folks over there as they team up with Rimac. And in the background, sales of the Taycan have been progressing well. Yes, they have sold a handful shy of 20,000 Taycans in the first half of the year. At this rate, they’re likely to hit the 40,000 mark for 2021!

As always, watch the video for more details and be sure to like and subscribe to this YouTube channel to always get notified of the latest videos.