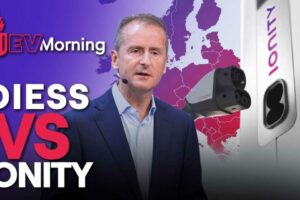 We’re back for another installment of EV Morning! We’ve pulled up some of the most interesting stories to come out recently, including some Tesla news, VW head Herbert Diess sending a shot across the bow of the IONITY network and some electric airplanes! Stay tuned for the details.

So let’s kick off with a little bit of Tesla news. And we’re rolling two into one here. Firstly it looks like the Cybertruck will be delayed…again! If you go on to the configurator, Tesla notes that production will commence in 2022, instead of the end of the year as previously planned. The exact reasons will be known only to top execs and Elon Musk, but it’s safe to say that battery supply constraint as they ramp up production is a factor!

And…as we are talking about delays in production it seems that Giga Berlin won’t be ready to produce Model Ys until at least the end of the year. However, our friends over at InsideEVs have scoured some sources and determined that the ship ‘Helios Ray’ is on its way to the port of Zeebrugge with an undisclosed number of made-in-China Model Ys on board. It’ll be a big relief for customers eager to get their hands on a car that seems destined to be a big success on European roads.

Now, we wouldn’t normally be dropping a news story in about a LinkedIn post, but VW boss Herbert Diess has publicly denounced the charging experience offered by IONITY, and this is something you don’t see every week!

In the LinkedIn post, Diess describes a recent charging experience on a drive he took in an iD.3 Pro S. What he encountered on the IONITY network was a number of units either broken or unavailable. He also noted the lack of restrooms and facilities. He ended his post with the scathing comment, loosely translated as ‘this is anything but a premium charging experience, IONITY!’

This could well be a public slap, while much bigger negotiations are proceeding in the background in terms of investment in charging networks.

And back to the topic of cars arriving in Europe. You may never have heard of BYD, a major Chinese manufacturer of EVs. Well, a shipment of 150 of their Tang SUVs has arrived in Norway for customer deliveries. It will be the first of up to 1,500 vehicles to get to customers this year.

It’s an exciting time for BYD as their domestic sales continue strongly, and they now embark on a sales push of private vehicles into Europe. The Tang SUV, with it’s 84.6kWh of Blade batteries and a WLTP figure of nearly 400km WLTP may well offer a very compelling option in competition to other European models.

Keep an eye on this company, and strangely enough…you may even have been on one of their all-electric buses without even knowing it!

Well, we just had to take the opportunity to talk about this story featuring the all-electric airplane…the Eviation Alice, with a range that could exceed 800km.
Yes, the international parcel delivery company DHL has ordered 12 units and expects to receive their first one in 2024. It’s a little early to get too excited about the plane as it’s yet to take its maiden flight. But the idea of battery-powered planes moving our goods about couldn’t go without comment!

The electric plane will be able to take a payload of up to 1,200kg and promises to recharge its batteries in half the time of the flight it just embarked on. So a one-hour flight means a 30min recharge.

Well, it’s not been a good phase in GM’s push for electrification. The battery issues they are having, and the associated recalls are likely to cost $800million of the $1.4billion that GM has had to set aside for recalls.

Nearly 70,000 Bolts will be brought back in to fix the issue with battery safety. This means that the cost to GM will be about $11,600 per car, or about $175/kWh. But of course, this doesn’t just refer to the pack cost. It surely includes the cost of bringing the cars back, taking the packs apart and actually fixing the issue before handing the cars back to customers.
Bolt EV owners have been asked to adjust their charging to minimize the risk of fire in the meantime. It’s an unwelcome development, and let’s hope that GM gets this sorted quickly so that we can all get on with the push to electrification.

So, that’s enough from us today, it’s time for you to have your say! Let us know in the comments what you think! And be sure to like and subscribe to this YouTube channel to stay up to date with our latest videos.