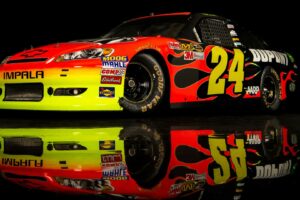 There are few race cars as iconic as the colorful no. 24 NASCAR cup car driven by Jeff Gordon. During his 22 full-time seasons competing in NASCAR’s top-tier series, Gordon captured 93 wins and multiple championships. He’s among the most successful NASCAR drivers of all time, so when one of his former race cars comes up for sale, people tend to notice.

The flame-wrapped car featured here is offered by Speedart Motorsports with an asking price of $165,000. It’s a 2011 Chevrolet Impala built by Hendrick Motorsports, chassis number 678, and campaigned in the 2011 NASCAR Sprint Cup season. Gordon drove this car at Indianapolis Motor Speedway for the Brickyard 400 on July 29, where he finished in 2nd place. Its next outing was at Michigan International Speedway on August 21 for the Pure Michigan 400, finishing 6th with Gordon behind the wheel. He also drove this car at Chicagoland Speedway on September 9, finishing in the 24th spot. Gordon ultimately finished the season in 8th place overall.

This isn’t a stripped-out NASCAR shell meant for display. According to Speedart Motorsports, it is turn-key ready and set up for road course events. It packs a proper Hendrick Motorsports 358 cubic-inch (5.9-liter) V8 engine, topped with a big Holley carburetor that feeds enough fuel to generate 850 horsepower. It’s connected to an SR-1 four-speed manual gearbox used for NASCAR road racing. Brembo brakes and 15-inch Aero wheels sit at each corner.

The interior is proper NASCAR-spec for the 2011 season, finished in white primer with the roll cage, window net, and a removable Momo steering wheel among the many features. The exterior wears the correct 2011 livery, including sponsors that were on board for the season. Speedart Motorsports notes that the rear spoiler is an updated carbon fiber item, but the original wing is included with the car.

This racer is among the last known ex-Gordon cars to be sold to a private individual straight from the Hendrick Motorsports team. It’s obviously not street legal, but a legit NASCAR cup car with ties to a legendary driver makes this a very special ride.