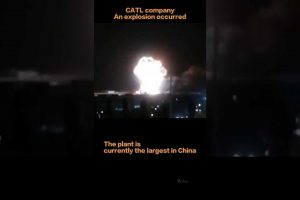 According to media reports, the explosion occurred at the battery recycling plant.

On January 7, an explosion occurred at CATL’s Brunp Recycling Technology plant in the city of Ningxiang in Hunan province, China. According to Reuters, one person was killed and six were seriously injured.

According to the media reports, the explosion occurred at one of the old workshops of the battery recycling plant, which probably means that it will have a very limited impact on CATL and its customers.

Brunp Recycling Technology has a new, larger battery recycling factory – considered the largest in the country. The old one has an annual capacity of 15,000 tonnes of cathode precursors.

“Daiwa Capital Markets said in a note the affected facility was an old factory with capacity to produce 15,000 tonnes per year of cathode precursors for CATL’s lithium-ion batteries but noted Brunp also had a newer and much larger plant.”

Nonetheless, it’s very unfortunate that such a thing happened. For now, it seems that CATL battery cell production will not be interrupted.