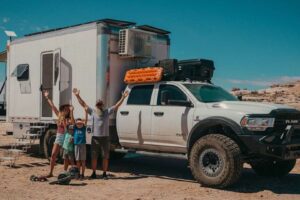 Kirt & Jen had over 10 acres of home and farm in Tennessee, but the couple decided to sell them in January 2021 and went full nomad together with their two young kids. The family has been on the road since then. Their weapon of choice? A self-built Ram 5500 overlander motorhome aptly named “Macho.”

Ultimately, we came to the realization that our relationships with each other and our influence over our children were more important than the money we made or the things we bought. So, we pursued an alternative lifestyle that allows us to bond as family, explore God’s Green Earth, and raise our kids the way we see fit.

The Ram motorhome was just built in March 2022. Before the custom box truck, the family had a Ram Promaster 3500 van. The couple decided to ditch the van and build a bigger rig because of space, payload, and 4×4 capabilities.

The switch was costly, though. The family had to rent an Airbnb while building the truck motorhome, which took them two months. The truck itself cost $65,000 while the box was bought brand new for $15,000. The build, on the other hand, warranted $50,000 more, which brought the total to $130,000. For an overlander motorhome that could practically go anywhere, that isn’t bad at all.

An interesting part of Macho is its outside deck, which was modified from the rear door of the box. With customizations done, the door becomes a flat surface with grass and awning, effectively making it an extended part of their living space.

The truck motorhome accommodates so much, apart from the 115 square feet of living space inside the box. It can carry 81 gallons of fresh water and 74 gallons of diesel. The tires can hold up to 6,400 pounds of payload. With 1,850 watts of solar energy available on tap, the couple figures that they can go off the grid for two weeks, wherever their journey takes them.