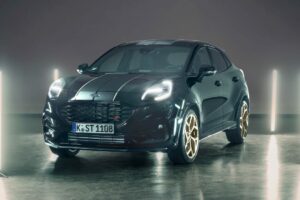 Ford has enlisted the help of 275,000 fans on social media to design a new limited edition version of the Puma ST, on sale later in 2021.

Called the Puma ST Gold Edition, Ford fans have been casting votes over social media platforms Twitter and Instagram to select a number of bespoke details, to create this new limited-run version of the brand’s small performance SUV.

These include exterior paint, decals and badging, with the end product unintentionally echoing the classic black and gold livery used by the Lotus F1 team for a number of years.

The public also had a say in the car’s ‘Gold Edition’ nameplate, and the detailing continues inside with gold stitching, gold stripes along the seats and carbon fibre dashboard trim.

No changes have been made mechanically to the Gold Edition. It still uses a 197bhp 1.5-litre turbocharged three-cylinder petrol engine and sends drive to the front wheels, with 0-62mph coming up in 6.7 seconds and a top speed of 137mph.

Amko Leenarts, design boss of Ford Europe, said: “To create something truly special for our loyal performance fans, we’ve moved to a forward-looking approach in co-creating the Puma ST Gold Edition with them. The number of votes cast shows just how enthusiastic our customers are – and that they have excellent taste. It’s all in the details, and with this special edition, our fans have configured a truly desirable product.”

This is not the first time Ford has collaborated with fans in designing a car. The Team Fordzilla P1 concept was created with input from gamers, who determined the interior design and drivetrain of the virtual race car.

Production numbers and pricing for the Puma ST Gold Edition are yet to be announced.