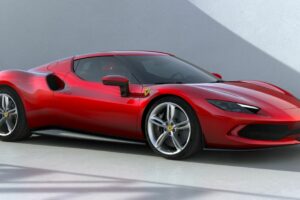 Ferrari has officially introduced the 296 GTB, its first V6-powered model in nearly half a century. The brand’s latest mid-rear-engined two-seater berlinetta arrives as a plug-in hybrid, making it the second series-production model to enter the line-up after the SF90 Stradale.

The engine is a brand new, 120° twin-turbo V6 with a displacement of 2,992 cc, which the automaker has chosen to badge as a 2.9 litre unit. This and the number of cylinders is what lends to the car’s name.

Fully-developed in-house, the F163 is the first six-cylinder mill to be installed on a road car sporting the Prancing Horse badge; into the 1970s, the company had V6 sports cars in its line-up, but these were sold under the Dino moniker.

Technical highlights include having the turbos installed inside the vee, which improves packaging, lowers the centre of gravity and reduces engine mass. Also revised are the IHI turbochargers, which can now rev to 180,000 rpm and offer an notable improvement in performance and boost efficiency. Like the SF90, the car features a MGU-K (Motor Generator Unit, Kinetic), in this case a dual-rotor single-stator axial flux motor in which torque has been increased to 315 Nm compared to previously. Unlike the Stradale, however, there are no front electric motors on the 296 GTB, essentially making it the first rear-wheel drive-only PHEV Ferrari.

As in the application in the flagship model, the MGU-K is housed between the engine and the gearbox, with a Transition Manager Actuator (TMA) – essentially, a clutch – set between the engine and the electric motor to decouple them in electric-only eDrive mode. The new system is made up of a triple-plate dry clutch, a clutch command module in line with the driveline as well as ECUs.

The lithium-ion battery is an 80-cell 7.45 kWh unit, which has four less cells than the 7.9 kWh battery in the SF90. It is also two kg lighter, and charge time is around 5% faster than the Stradale’s unit (which takes about three hours to fill), according to Ferrari technical director Michael Leiters. Despite this, all-electric range is similar to the SF90 at 25 km, and the car can operate at up to 135 km/h in pure electric drive.

As it is on the SF90, four drive modes are available, selected via the eManettino controller. These are all-electric eDrive; Hybrid, the default setting when the car is turned on; Performance, which keeps the engine running and prioritises charging the battery than on efficiency, and Qualify which provides maximum power output by allowing the electric motor to work at its maximum output and prioritises performance over battery charging.

This helps enhance the car’s fun-to-drive factor, improving the vehicle’s response to steering and throttle input as well as the sensation of coherent progression through the gears with every gear change. Braking has also been enhanced with the inclusion of a new brake-by-wire system and a new function called ABS evo, which ensures pedal travel is reduced to an absolute minimum, boosting the element of sportiness without neglecting efficiency whether braking lightly or when on the track.

Stopping distances in the dry have also been significantly shortened by the new ABS evo and its integration with the 6w-CDS sensor, which also ensures more consistent braking force under repeated heavy braking. The automaker said that compared to the F8 Tributo, the 296 GTB reduces the 200-0 km/h braking distance by 8.8%

Inspiration was drawn from past models, in particular the 1963 250 LM, which provided reference points for the design of the B pillar, the wings into which the air-intakes are set as well as the Kamm tail. The visor-style wraparound windscreen, meanwhile, is derived from the one-off P80/C and Japanese market J50, while the headlights borrow from the “teardrop-shaped” headlights of the past.

As such, while there are links to the SF90, the suit the 296 wears is definitely its own. The front end is much more tapered than the automaker’s previous mid-rear engine V8 models, and there’s an organic feel to the second half of the car, with imposing flying buttresses, wide wings and an engine bay cover with a unique, three-dimensional glass surface on display.

For wheels, the car gets a new twin-spoke alloy design that accentuates the sculptural effect of the starburst shape, with a five-spoke forged diamond-cut finish unit available as an option. Additionally, there is also a carbon-fibre wheel option, which is eight kilos lighter their forged counterpart, just the thing for performance.

Plenty of attention has been paid to aerodynamics, with one of the major highlights being the incorporation of an active aero device not just to manage drag but to generate extra downforce to maximise the car’s handling and braking performance at high speeds. Based on the LaFerrari’s unit, an active spoiler integrated into the rear bumper offers the car the ability to generate a high level of rear downforce, by up to 360 kg at 250 km/h with the Assetto Fiorano package specified for the car.

Inside, the 296 GTB’s cockpit continues on the tech-centric presentation that premiered on the SF90 Stradale. The digital instrument cluster, which is set into a deep cleft carved out of the dashboard trim, continues to be the primary focal point. It’s flanked by two side satellites, each with its air-condition vent and individual capacitive touch controls.

Effort has been made to blend the design elements to be as seamless as possible, providing continuity and flow. For example, the sculptural door panel is a continuation of the dashboard in terms of both materials and colour, while the head-up display is integrated into the leather trim. Likewise, the speaker covers utilise thermoplastic material in the same colour as the dashboard.

As with the SF90, the 296 GTB is also available with an Assetto Fiorano package, which includes special GT racing-derived adjustable Multimatic shock absorbers optimised for track use, high downforce carbon-fibre appendages on the front bumper that can deliver an additional 10 kg of downforce and more extensive use of lightweight materials such as carbon-fibre for both cabin and exterior. These include a reworked door panel offering weight-savings of 12-plus kilogrammes.

Other options unique to the Assetto Fiorano package includes an ultralight Lexan rear screen, which lops off an additional 15 kg, and Michelin Sport Cup2R high performance tyres aimed at the track enthusiast. A special livery inspired by the 250 Le Mans can also be ordered exclusively by those going the Assetto route, which can be seen on the silver example in the photos here.

Deliveries of the 296 GTB are set to begin in the first quarter of next year, starting with left-hand drive European markets. As for pricing, this will start from 269,000 euros for the standard car in Italy, and 302,000 euros for the Assetto Fiorano package.