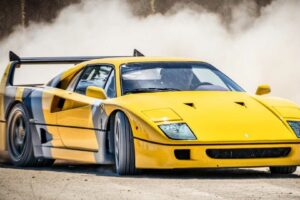 Safe to say this F40 hasn’t been babied.

It’s been five years since the YouTube channel TaxTheRich100 last uploaded a video of a high-end vehicle being thrashed around. It was an excellent source of entertainment, showing the likes of the Ferrari 288 GTO, F50, and Enzo being abused. The channel also had an F40 GT featured in a “Farmkhana” event, along with a Bugatti EB110 SS doing a burnout and a Jaguar XJ220 driven off the beaten path somewhere in the countryside.

In the same spirit, TheTFJJ has now uploaded a video of an F40 being properly used on a dirt course, with the driver not being afraid to go a bit sideways in the expensive and rare late 1980s / early 1990s gem. We’ve seen this exact car before, and it appears it’s been modified to accommodate a new rear diffuser and spoiler akin to the F40 LM.

Mind you, this is a genuine F40 and not some high-quality replica trying to trick us into believing it’s the real deal. Unlike most cars playing in this league that are babied by spending most of the time locked up in an air-conditioned garage, the owner actually uses it. The straight-piped supercar carrying the “F400 MPH” license plate has been an Internet sensation for quite a while and it’s safe to assume it is one of the highest-mileage examples of the last car to get Enzo’s stamp of approval.

We can’t fathom the servicing costs needed to keep the F40 in tip-top shape, especially since the car has been driven extensively, but we’re glad the owner is not shying away from pushing it every chance he gets. The analog supercar from Maranello remains as captivating as ever, even more so when it’s tackling a less-than-ideal road surface.