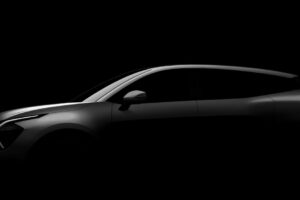 Kia has released official teaser images of its forthcoming, fifth-generation Sportage SUV ahead of its July debut in its native Korea.

The Korean manufacturer’s ‘Opposites United’ design language is applied to the upcoming Sportage, and the SUV is teased in one of these images showing its LED DRL arrangement which runs from its headlamps, downwards to the corners of its front bumper.

Spy images provided by our photographer sources in Europe also reveal that the headlamp cluster of the Sportage is located inboard of the distinct LED DRLs, appearing to wear horizontal patterns for its main beams and possibly for its indicators as well.

These will be joined by a black grille graphic spanning the width of the vehicle’s front end, says Kia, while at the back, the design of the rear daytime-running lamps echo those of the DRLs at the front of the vehicle.

Also included in the trio of teaser images is a glimpse of what the Sportage interior will look like; here, the SUV’s cabin features an integrated, widescreen curved display, bookended by vertically oriented air-conditioning vents which are complemented by slim, horizontal outlets below the display, above the centre console.

In terms of engine selection, Kia describes those for the upcoming Sportage as “highly efficient powertrains”, which are likely to include hybrid as well as plug-in hybrid setups.

Judging from the 2022 Hyundai Tucson for comparison, these could be the 1.6 litre turbocharged petrol paired to a six-speed automatic, producing 226 hp and 350 Nm of combined output in the hybrid that uses a 1.49 kWh battery pack for a total fuel range of more than 800 km, while the plug-in hybrid version of the Tucson gets a 13.8 kWh battery that offers a fully electric range of 45 km.

With just over a month to go before its official debut, more details for the next-generation Kia Sportage will be revealed in the coming weeks, says the Korean manufacturer.