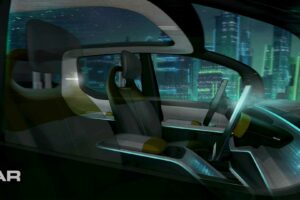 Fisker has released additional details about its second vehicle, the PEAR (Personal Electric Automotive Revolution), and showed the first interior rendering of the affordable EV that will cost just under $30,000.

Described as an urban sporty crossover smaller than the Ocean SUV, the Fisker PEAR promises to offer “a new level of storage for its segment.” Design-wise, the beltline and side window area are extremely low, while the large, wraparound windscreen is said to offer a commanding view when driving.

The dashboard is dominated by a massive revolving display and features ambient lighting on a translucent surface, as does the center tunnel. The seats are slim but look comfortable, while the Fisker SolarSky panoramic roof has a double use: it enhances the cabin’s feeling of airiness and adds emissions-free range to the battery.

We also learn from the short release that the Fisker PEAR will have the first-ever Fisker “Houdini trunk,” described as “an alternative to traditional rear cargo hatches.”

Fisker has also revealed that the PEAR will be available in single motor, rear-wheel-drive and dual motor, all-wheel-drive configurations, with a choice of two battery packs; the larger Hyper Range pack’s targeted range is over 310 miles. As for the trim level structure, the automaker says it will offer four levels of option packages.

Interestingly, Henrik Fisker announced that the company already has over 3,200 reservations for the PEAR, which the founder boldly calls the “21st century’s most innovative vehicle.“

“The Fisker PEAR’s cool new features and technologies – and affordable pricing below $29,900 – are designed specifically for the customer of the future.”

Scheduled for a full unveiling in the second half of 2023, the Fisker PEAR will enter production at a plant owned by partner Foxconn in 2024. The company says that development is well underway, with prototype testing expected to begin at the end of 2022.

On a related note, Fisker also disclosed that reservations for the Ocean electric SUV surpassed 50,000, a significant rise from the 40,000 preorders announced in early April. The Ocean will start production in Austria on November 17, 2022, with the base Sport trim priced at $37,499 before incentives.