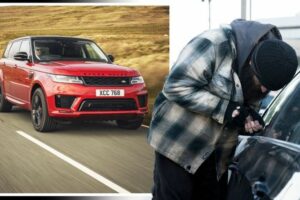 They said Range Rover models accounted for 29 percent of the total number of vehicles recovered by Tracker in the past six months. Tracker said they had recovered over £4.2million worth of stolen vehicles during January and June of which 4X4 vehicles accounted for £2.6million.

One of the most valuable models stolen in the past year was a £94,000 Range Rover Sport in May.

Models made by Jaguar Land Rover made up the top five most popular vehicles recovered by Tracker after being stolen.

They said the Range Rover Sport was the number one most popular model recovered by Tracker in 2021.

The Range Rover Autobiography was the second most popular model recovered followed by the Land Rover Discovery.

In a statement to Express.co.uk, Jaguar Land Rover said tackling vehicle theft was a “top priority”.

They said Range Rover models have been given a top security rating while the car’s safety tech had been “independently verified”.

The technology measures the distance between keys and the vehicle and can stop the engine from starting if the keys are not physically in the vehicle.

They said: “Jaguar Land Rover takes the criminal issue of vehicle theft as a top priority and as a result, we were the first manufacturer to integrate UWB technology into production cars to prevent relay attack.

“Our cars featuring UWB technology have been independently verified by the Which? and the ADAC both citing Jaguar and Land Rover as taking the situation seriously with independent industry security experts, Thatcham giving our vehicles a “Superior” security rating.”

Tracker data showed volume theft had increased by 32 percent by the end of June compared to January.