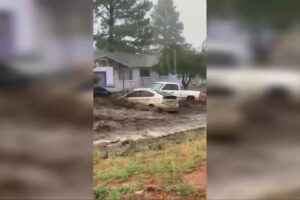 Dramatic video captured flash floods tearing through the Flagstaff, Arizona community this week. Land left barren and scarred by the 2019 Museum Fire allowed the rain to wash through neighborhoods, bringing massive amounts of water, debris, and destruction with it. It’s something that residents have been preparing for since the fire, though this is the first time there’s been enough rain to cause flooding.

According to 12 News, Coconino County officials said just two inches of rain fell on a portion of the Museum Fire burn scar, which was enough to cause the flooding in the area that gummed up roads, swept away cars, and stranded drivers in dangerous situations. Ground doesn’t absorb water as well after a fire. More rain directly on the burned area could have made the situation so much worse. Torrential rain lashed the area Tuesday and Wednesday this week.

Fast-moving water stranded a man and his two young daughters on the roof of their vehicle after floodwaters swept away their Jeep Wrangler. A collection of flood videos has one clip that captured the rushing waters washing a Toyota Prius down the street, which collided with a white Dodge Ram pickup down the road. The clips show some residents were prepared with sandbags lined outside their houses in an attempt to keep the waters at bay.

So far, thankfully, there haven’t been any reports of deaths or serious injuries related to the flash flooding hitting the area. A bigger storm in the future that drops more rain could cause even more destruction, with the recent flooding serving as a reminder that humans can rarely hold back nature. Late last month, Oregon suffered from an extreme heatwave that caused roads to crack and buckle, again showing how connected we are to nature and the world around us.