Ford And SK Innovation's Battery JV To Extend Into Europe 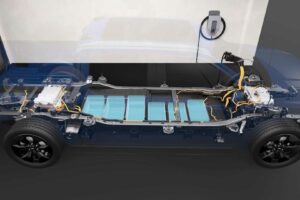 The 60 GWh battery plant is just the beginning of a much larger project.

The second step is the BlueOvalSK battery joint venture in the U.S., which is expected to produce 60 GWh of battery cells and modules annually (“with potential to expand”), starting mid-decade.

The strategic partnership with SK Innovation probably will result in another joint venture battery gigafactory in Europe, according to an Automotive News article.

“We’re very excited about this joint venture and it’s going to be beyond just North America. It will certainly extend into Europe.”- Hau Thai-Tang, Ford’s chief product platform and operations officer said at a J.P. Morgan conference

It means that Ford is securing a stable stream of batteries for mass electrification, while SK Innovation progresses on its road to become the top EV battery manufacturers in terms of volume (over 500 GWh annually by 2030 from about 40 GWh now).

Ford’s global battery demand is expected to reach 240 GWh by 2030, including up to 140 GWh in North America. Our bet is that there will be at least two BlueOvalSK gigafactories in the U.S. to fulfil demand, at least if there is no other supplier.

An important thing noted in the article is that Ford is now more serious about BEVs than ever with in-house production of gearboxes and electric motors for the upcoming models and potential vertical integration of software and semiconductor chips.