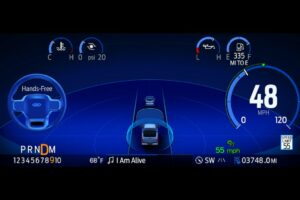 Back in April, Ford shared all the details of its Level 2 hands-free driver assist system, dubbed BlueCruise. It’s the Blue Oval’s answer to GM’s Super Cruise, Tesla’s Autopilot with Full-Self Driving Capability, and others. The news came just as engineers completed “the Mother of All Road Trips”—a 110,000-mile odyssey comprising as many of the 100,000-plus miles of fully digitized highways, called Hands-Free Blue Zones, on which BlueCruise operates in 37 states and five Canadian provinces. This week we were invited to give BlueCruise a try for ourselves.

To briefly recap the system we fully explained back in April, BlueCruise utilizes high-resolution GPS, three radar units mounted at the front corners and center of the vehicle, and a camera mounted high on the windshield facing forward to determine the vehicle’s exact position on the road and monitor lane markings, traffic, or other obstacles ahead. A second infrared camera positioned atop the steering column monitors the driver’s head position and eye gaze to confirm the person behind the wheel remains capable of taking over control of the vehicle should the need arise.

How BlueCruise Communicates With the Driver

Lane centering, by itself, is a fairly new feature at Ford. It can be used on any road, as long as the driver’s hands remain on the wheel. When the vehicle is centering itself, an overhead image of the so-equipped Ford model (either a Mustang Mach-E or an F-150 at the moment) appears on the gauge cluster screen. Yellow lane markers, which switch to green as the vehicle centers, appear on each side of the digitally displayed Ford.

Once centered in the lane, the image changes to indicate a circle around the vehicle with a smaller semicircle bulging out ahead of it. At the same time, a “hands on steering wheel” icon appears at the bottom of the image. When the vehicle enters a Hands-Free Blue Zone roadway in this condition, the little icon disappears and a larger steering wheel icon shows up next to the overhead image with the words “Hands-Free” displayed inside. The main vehicle image also depicts several more concentric circles emanating out to indicate the system is monitoring traffic. Ford claims this text and graphic approach is more easily perceived and understood by colorblind people than the GM Super Cruise approach of illuminating LEDs in various colors (to indicate system functionality) on the steering wheel rim.

Two Strikes and You’re Out

Look away from the road for too long, and the system gives an audible beep and flashes a message in the cluster. Continued failure to return eyes to the road prompts a more insistent continuous tone and a message to take the wheel. If the driver remains unresponsive, the car begins to slow to a stop. If the driver intervenes during this period, the system will allow a resumption of BlueCruise once. Invoke the third warning level a second time, and the system locks out until the ignition is cycled again at a stop. GM Super Cruise locks the driver out after one such third-warning incident.

Ford BlueCruise vs. GM Super Cruise: How the Systems Compare

These systems are functionally similar. Each reduces the workload on the driver to limit fatigue on long journeys and largely steer the vehicle the way an attentive individual would. That said, the steering through one freeway bend felt a bit notchy, or incremental, in the Mustang Mach-E we sampled. Both systems seem to tolerate a similar duration of looking away from the road.

How Much Does BlueCruise Cost?

The feature is standard on all Mustang Mach-E variants except the base Select trim, where it comes bundled in a Comfort and Technology package for $3,200. That prices the most affordable BlueCruise-equipped Mustang Mach-E at $47,195. The F-150 Limited comes standard with BlueCruise. On Lariat, King Ranch, and Platinum variants, the option itself costs $1,595, but it forces several other options that price the cheapest F-150 with BlueCruise at $54,285. By comparison, GM’s Super Cruise adds $2,200 to a Chevrolet Bolt EUV Premier, bringing its total to $40,695, while the most affordable way to get a Cadillac with Super Cruise requires writing a $50,340 check for an optioned-up CT4.

When Does BlueCruise Launch?

The hardware required for BlueCruise has been orderable for some time, and the software to activate the system’s full functionality is about to roll out during the third quarter of this year. Those who purchased the hardware prep package for $995 on the F-150 or $2,600 on the Mustang Mach-E will pay $600 for the software. All in, that’s the same price Ford charges for the complete system (hardware and software) it now produces so-equipped F-150 and Mustang Mach-E models with.