Ford Bronco Likes To Whistle While It Works, Owners Aren't As Happy 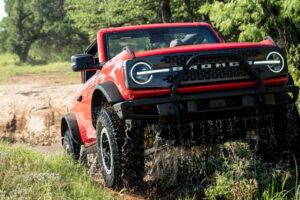 It’s been over a month since 2021 Ford Bronco deliveries began. While some buyers are desperately trying to resell their new off-roader for ridiculous sums of money, most are driving the reborn off-roader and enjoying every minute of it. Well, almost every minute.

It seems at least some new Broncos have issues with whistling noises at highway speeds. Several forum members at Bronco6g.com who’ve either driven or taken delivery of a new Bronco report hearing a very noticeable whistle and apparently, it’s enough to be rather annoying. Side mirrors and grilles are two areas of concern, and according to a recent Ford TSB posted on the forum, Ford is taking action to address the grille. There’s no word on the mirrors.

What exactly are the problems? That’s still up for debate, but with regards to the TSB for the grille, Ford believes a hood seal could be the culprit. Whistling noises from the front at speeds over 30 mph could be caused by airflow coming through a gap between the grille and hood. However, the TSB states this only applies to Big Bend and Outer Banks trim levels, presumably because of their specific grille design. According to the TSB, Ford is working on an improved hood seal to remedy the issue and it will be available in October 2021.

However, there’s another issue that isn’t specific to trim. Whistling sounds around the driver-side exterior mirror are cropping up, and some forum members believe it’s due to gaps in the mirror housing. At least one forum member remedied the sound by running some electrical tape over the gap, while others stated the noise went away if they put their hand in front of the mirror or pivoted it closer to the body. It’s not clear if the gap in the housing is supposed to be there, but some forum members with whistling issues said the passenger side mirror had no gap while the driver side had a small one.

A video from Pickens Party of 5 on YouTube captures the whistling at highway speeds starting at the 7:42 mark, and it’s certainly prominent.

We were unable to find any Ford TSBs regarding whistling from mirrors, and we’ve contacted Ford directly for more information and a comment on what these forum members are reporting. That said, whistling noises are minor (if annoying) issues that often crop up with brand new vehicles or significantly redesigned models. Motor1.com editors haven’t experienced the whistle during our time with the off-roader thus far, but we’ll have an extended visit with the Bronco in a few weeks and we’ll certainly be listening for any errant noises during our road trips.