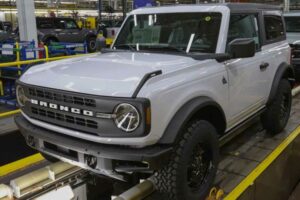 We take technology for granted, which allows us to access and capture more information than ever. It also allows us to see in places not normally open to the public, such as an operating factory floor, and that’s what Ford is doing with its latest bit of Bronco brand building. The company is sending owners pictures of their finished SUV as it rolls off the assembly line.

Ford began sending Bronco customers photos earlier this week, according to BroncoNation.com. “We wanted to give you a look into the journey your Bronco took from the factory floor to your driveway,” Ford’s note to customers reads. “Here’s a photo of your Bronco, moments after exiting the assembly line. Ford has linked to an unlisted video sizzler that shows the Broncos making their way through Ford’s Michigan Assembly Plant (below).

Ford CEO Jim Farley took to Twitter to retweet one customer’s photo, saying the company plans to expand sending pictures to confirmed orders as they’re delivered. The current batch of photos was sent out to two- and four-door Broncos retail customers who have already received their SUVs.

Ford’s brand-building efforts come as the company continues to encounter production headaches with the new SUV. The Bronco’s roof has been one particular pain point, which has disrupted production on more than one occasion. The automaker has also stepped up its efforts to keep waiting customers happy, offering them booze, hammocks, and accessory upgrades, while trying to make the delays as painless as possible.

As Ford gets the Bronco out of the factory, it’s already looking toward the future. Rumors suggest the brand is readying a refresh for 2024 or 2025. Ford is also getting the Bronco Raptor ready for its debut, which will give the rugged off-roader even more performance. We’ll get the Bronco Raptor sometime next year.