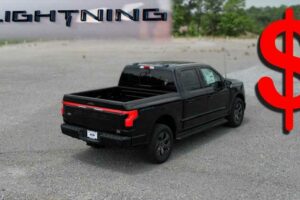 The Ford F-150 Lightning is an incredibly compelling vehicle. Not only is it very affordable to purchase, but being electric it’s also rather cheap to run. There’s no doubt that it’s less expensive to own than an ICE F-150, but just how much less? YouTuber Town and Country TV tried to find out in his latest video.

You may be thinking the F-150 Lightning has just been released, so how can long-term ownership costs possibly be calculated? Well, Mitchell from Town and Country TV used a fuel savings calculator to determine that, over 10 years and 165,000 miles, a Lightning would cost $11,070 ($1,107 per year) to run at current electricity prices. For comparison, an equivalent gasoline F-150 would cost $43,330 ($4,333 per year) to fuel over the same period. That doesn’t account for public charging, but you have to remember the vast majority of people predominantly charge at home. So you’re saving $32,260 on fuel alone if you decide to keep the Lightning for a decade.

Mitchell determined that the break-even point for a high-spec Lariat Lightning versus an ICE Lariat was around 20 months. One thing that could not be calculated was maintenance costs, as the Lightning has not been around long enough to gather sufficient data for that area. However, EVs are a lot less complex than ICE vehicles and typically are much cheaper to maintain. Quite simply, there are much fewer things that can go wrong in an EV.

Mitchell outlined that EVs are fast, fun and convenient. He believes now is the right time to make the switch, and that’s why he has an F-150 Lightning on order.