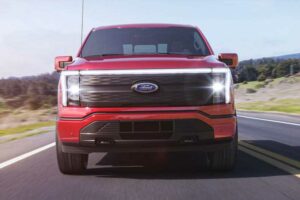 The 2022 Ford F-150 Lightning is a big deal. Ford made headlines around the world when it announced the new electric F-150, not just because it was electrifying the best-selling vehicle in North America, but because of how affordable it made the EV pickup. With the 2022 Rivian R1T and 2022 GMC Hummer EV Pickup starting at $68,645 and $110,295 respectively, the F-150 Lightning’s $41,669 start price is seen as democratizing the electric pickup. With the release of the F-150 Lightning’s configurator today, that affordable aura still appears to hold true—so long as you don’t need to step up to the optional 300-mile Extended Range Battery.

All F-150 Lightnings come standard with a dual-motor all-wheel drive system good for 426 hp and 775 lb-ft of torque. That setup is paired with the 98-kWh Standard Range Battery, good for a Ford-estimated 230 miles of range (EPA figures are still pending), on the base F-150 Lightning Pro, Lightning XLT, and Lightning Lariat trims. The optional 131-kWh Extended Range Battery is optional on the XLT and Lariat and standard on the range-topping Platinum; it ups power to 563 hp and 775 lb-ft of torque, while range jumps up to a Ford-estimated 300 miles on the XLT and Lariat, and 280 miles on the top-level F-150 Lightning Platinum.

According to Ford’s configurator, that 70-mile range cushion will cost F-150 Lighting XLT buyers a pretty penny. Starting at $54,669 with the standard battery, opting for the Extended Range Battery adds $19,500—roughly the cost of an entire Ford Maverick—to the F-150 Lightning XLT’s base price.

In other words, that means the cheapest 300-mile F-150 Lightning will set you back $74,169. That’s more than the MotorTrend Truck of the Year-winning Rivian R1T, which can both go further on a charge and charge quicker than the Ford. It’s worth noting that the Hummer EV Pickup beats both the Rivian and Ford in charge speed and range, though the only versions available now start in the six-figures.

To be fair, Lightning buyers get more than 33 extra kWh for their extra 20 grand. Although Ford nominally lists the battery upgrade as a $10,000 option, it is bundled with Equipment Group 312A (listed as a $9,500 option, despite the fact that you can’t separate it from the Extended-Range Battery). While confusing to consumers at best and intentionally misleading at worst, opting for the combined equipment and battery package does net Lightning XLT buyers quite a bit of extra features, such as 20-inch wheels, Ford’s latest Co-Pilot 360 Advanced Driver Assist System, power tailgate with tailgate step and work surface, heated front seats and steering wheel, and the 9.6-kW Pro Power generator, among other things.

It’s a similar story on the premium F-150 Lightning Lariat, though the upcharge for the Extended Range model is far less steep. Starting at $69,169, opting for either the Extended-Range Battery or Equipment Group 511A (both are bundled together) adds $10,000 to the pickup’s sticker, bringing the price up to $79,169. As mentioned, there is no upcharge on the $92,569 F-150 Lightning Platinum, as the Extended-Range Battery is standard on that pricey luxury model.

Regardless of the surprising premium one pays for the F-150 Lightning’s larger battery, Ford expects demand to be robust. It has just announced that it’ll be increasing production capacity from 80,000 units per year to 150,000 per year, based on unprecedented demand. F-150 Lightning deliveries are expected to begin this Spring.