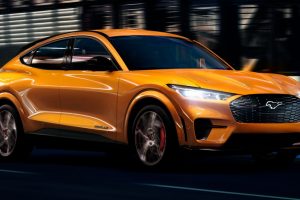 Ford has bagged both the North American Truck of the Year and Utility Vehicle of the Year awards for 2021, with its F-150 and Mustang Mach-E securing the respective titles for the Blue Oval. The winning vehicles were deemed the benchmarks in their segments, based on factors such as innovation, design, safety, handling, driver satisfaction and value for money.

The all-new F-150, which made its debut in June last year, finished ahead of the two other finalists, the Jeep Gladiator Mojave and Ram 1500 TRX. In awarding the pick-up with this year’s award, the judging panel said the automaker found many ways to improve what was already the market’s top-selling pickup.

“The latest version refines the package, keeping what’s good, updating as needed, and delivering the right mix of features, capabilities, comfort, and style—with the added benefit of the first hybrid powertrain in almost a decade to debut in a full-size pickup truck,” said a juror. As for the Mustang Mach-E, the all-electric SUV emerged victorious in three-way battle against the Genesis GV80 and Land Rover Defender. The Mach-E is available in rear- or all-wheel drive and in 68 kWh and 88 kWh versions, in a variety of power output configurations ranging from 266 hp and 430 Nm right up to 480 hp and 860 Nm (the latter torque, in the GT Performance Edition).

Previously, it would have been unheard of to put an iconic Mustang badge on a utility vehicle, but jurors said that the automaker’s decision to take that risk paid off with the Mach-E, and said the SUV’s cutting edge tech has put it ahead of European EVs as the Tesla Model Y’s most formidable challenger yet.

END_OF_DOCUMENT_TOKEN_TO_BE_REPLACED

END_OF_DOCUMENT_TOKEN_TO_BE_REPLACED
We and our partners use cookies on this site to improve our service, perform analytics, personalize advertising, measure advertising performance, and remember website preferences.Ok