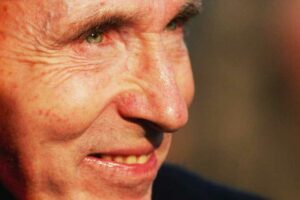 Frank Williams, founder of the eponymous

who for decades was the face of the multiple-championship-winning organization, died on November 28. No cause of death was given.

“It is with great sadness that on behalf of the Williams family, the team can confirm the death of Sir Frank Williams CBE, founder and former team principal of Williams Racing, at the age of 79,” the team said in a prepared statement.

“After being admitted into hospital on Friday [Nov. 26], Sir Frank passed away peacefully this morning surrounded by his family.

“Today we pay tribute to our much loved and inspirational figurehead. Frank will be sorely missed. We request that all friends and colleagues respect the Williams family’s wishes for privacy at this time.

“For those wishing to pay tribute, we ask that donations are made in place of gifts to the Spinal Injuries Association, alternatively we would welcome flowers to be placed at the entrance of the team’s headquarters in Grove, Oxfordshire. Details of the memorial service will follow in due course.”

Born in 1942 in South Shields, England, Williams worked for a spell as a mechanic and drove in lower-level races himself. In his 20s he formed Frank Williams Racing Cars, effectively making him a wheeler-dealer in the British motorsports scene whom some of his peers viewed as a second-rate contender and bit player. He would prove them wrong, and then some.

Williams initially bought and sold cars and parts, and ultimately found his calling by entering and running cars for other drivers. After outings in F2 and F3, Williams for 1969 bought a secondhand Brabham F1 chassis, put his good friend and roommate Piers Courage behind the wheel, and promptly scored two second-place finishes. But Courage was killed in the 1970 Dutch Grand Prix, an event that forever stuck with the team boss.

Five years after Courage’s death, financial struggles caused Williams to sell a majority stake in his team to Canadian Walter Wolf prior to the 1976 F1 season. He remained for a time as team manager of Wolf-Williams Racing, but for 1977 founded

along with friend and fiery engineering ace Patrick Head. It was the last team Williams would ever need to form.

During the same era,

was killed while driving a Williams FW16 (all Williams cars bear the “FW” designation, for “Frank Williams”) in the 1994 San Marino Grand Prix at Imola in Italy. It was the legendary Senna’s first season with the team, and his death, like Courage’s, rocked Williams and his team to their foundations. To this day, every Williams chassis carries the Senna “double S” logo on the front of each car.

Frank Williams, however, was accustomed to overcoming what seemed like impossibly debilitating challenges. On March 8, 1986, a road-car crash in the south of France—Williams lost control of the rental car he was driving from Circuit Paul Ricard to the airport—left him quadriplegic and confined to a wheelchair for the rest of his life. But he ultimately returned to the pit lane, where he was a fixture during every race weekend until 2012 when he took a step back from the team’s operations.

Claire Williams, Frank’s daughter with his late wife, Virginia—they are also survived by sons Jonathan and Jaime—was soon thereafter named deputy team principal and increasingly was the lone family member seen publicly at F1 race meetings. Claire Williams resigned her position in September 2020 after U.S. investment powerhouse Dorilton Capital acquired the team, marking the end of the road for the last of F1’s old-school, family-formed-and-operated entrants. Dorilton has kept its pledge of keeping the Williams Racing name in the sport, as it pours in much-needed resources to return it to the front of the grid—the team’s most recent win came in the 2012 Spanish Grand Prix, with driver Pastor Maldonado.

In 1999 Frank Williams was knighted by Queen Elizabeth II for his contributions to British motorsport, making him Sir Frank Williams. The queen in 1987 awarded him the title of CBE (Commander of the Order of the British Empire). In the wake of his death, fresh tributes poured in.

“Frank was one of the old-timers who went back an awful long way,” former F1 commercial boss Bernie Ecclestone told the PA news agency. Indeed, Ecclestone was one of Williams’ contemporary old-timers, the two racing giants having known each other for more than 50 years.

“One wonders if people like Frank had not been around in the early days whether Formula 1 would have survived today. He was one of the people that built Formula 1. It’s the end of an era.

“Claire phoned me this morning to say we had lost Frank, which I was happy and unhappy about. He had done so well for so long. But maybe these things are a blessing in disguise.

“She was obviously upset. They called her yesterday to the hospital and said you ought to come and see him because he doesn’t have long to be with us. But I asked if he suffered at all and she said no, he didn’t.

“His story is incredible. Nobody lived as long as him in his condition. But Frank never complained. He never whined and grizzled. He got on with things the best he could. He was a fighter. Frank was just Frank. He gelled with everyone, and everyone liked him.”