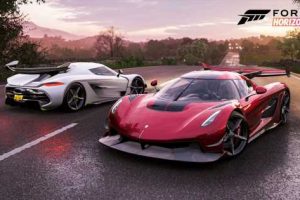 2020 is officially in the endgame. To help ring in the new year, a fresh Winter season is underway in Forza Horizon 4. With a new batch of events and content, players will be kept busy as 2021 begins.

A brand new Koenigsegg arrives to speed up the New Year transition, along with more Playlist prizes for 50% and 80% completion. Read on further to see Winter’s New Year festivities. 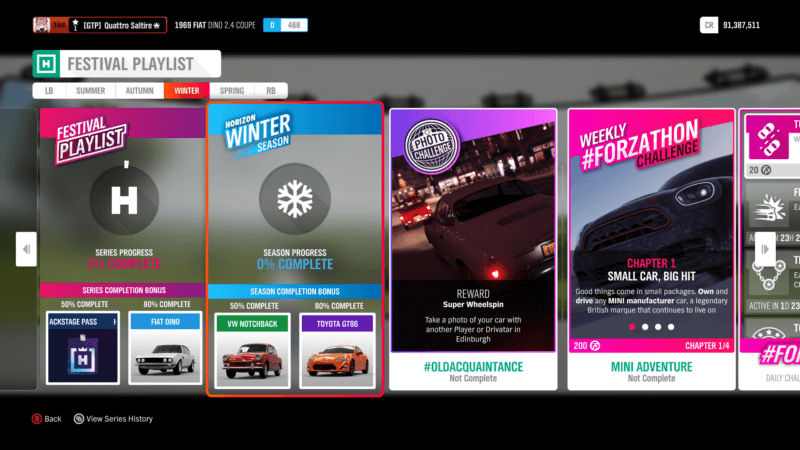 Playlist prizes look to slow things down this week, led by the Volkswagen Type 3 1600 L.

This small, two-door sedan was designed to be a more desirable alternative to the humble Beetle. The notchback design allowed for greater practicality despite being rear-engined. That engine is a 1.6-liter flat-four that makes a modest 65hp. Despite this, the Notchback would pave the way for important VW sedans such as the Passat.

If you want some more power, then there’s the Toyota GT86. Reviving the iconic nameplate, the GT86 was not designed for ultimate performance. The main goal was to provide the most fun driving experience and tuning potential. Co-developed with Subaru, the GT86 features a 2.0-liter flat-four producing 197hp. Thanks to skinny tires, the snowy conditions will be perfect for the GT86’s habit of sliding around corners.

Although there’s no virtual Hogmanay party in Edinburgh, the Winter Photo Challenge wants you and a friend to head to the Scottish capital. #OldAcquaintance requires you to snap you and a player or Drivatar whilst in Edinburgh. Seasonal championship prizes include the Hennessey VelociRaptor 6×6 and the Porsche 718 Cayman GTS.

The big news is the arrival of the latest Koenigsegg. Succeeding the Agera RS, the new Koenigsegg Jesko has just one aim: to be the fastest street car ever made. The Jesko’s quest for 300mph comes courtesy of a 5.0-liter, twin-turbocharged V8. On regular gasoline, the Jesko makes 1,280hp with the potential for 1,600hp on more potent fuel.

If you want the Jesko, you’ll need to win the “Let It Snow” championship.

Wrapping up 2020 is a returning Showcase Remix. “Ride To Anywhere” puts you back behind the wheel of Isha’s Austin taxi in a charge across the Scottish Highlands. Your opponent in this showdown is a giant hovercraft.

Winter events are listed below: 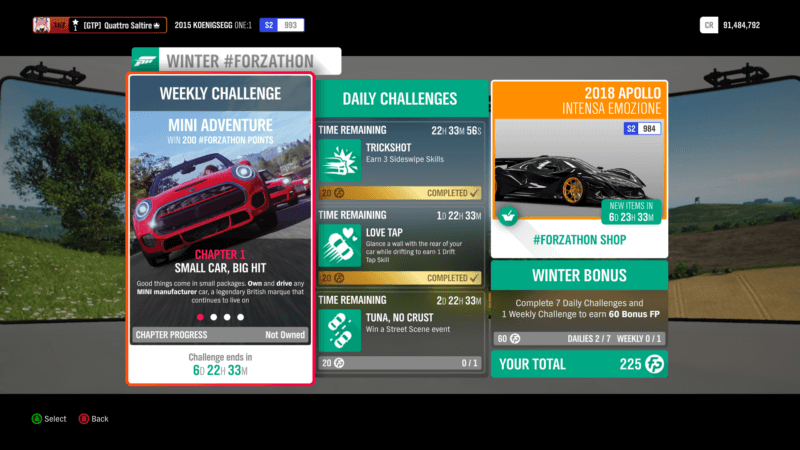 Forzathon takes its weekly spotlight towards a British icon for the latest challenges: the Mini. Pick your Mini from any era to get things rolling.

Finally, bring the curtain down on the year by earning a total of nine stars from Speed Zones. 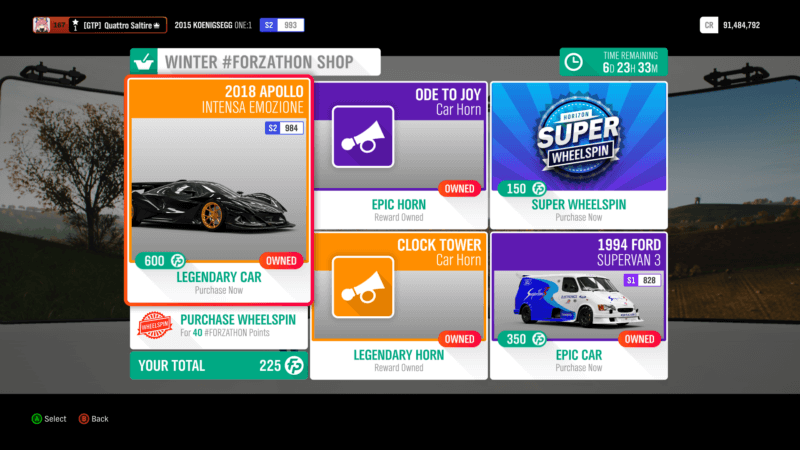 A couple of old fan favorites make their return to the shop this week. Taking center stage is the Apollo Intensa Emozione.

Designed as a track monster, the Apollo takes inspiration from older GT1 racers. Under the wild styling is a 6.3-liter V12 making 780hp. With downforce on par with modern GT3 racers, the Apollo will need a skilled hand to get the best out of it, especially in the icy winter.

600 Forzathon Points is the cost of the Apollo IE, but in return, you’ll be getting a car that trumps Lamborghinis in the madness stakes.

Another wild track beast in the shop is the Ford Supervan 3. The unholy marriage of a Ford Transit van and a Ford Group C prototype resulted in one of the wildest commercial vehicles ever. Originally powered by a 650hp Cosworth V8, the Supervan was eventually fitted with a 3.0-liter V6 making a more managable 300hp.

At 350FP, the Transit looks like a bargain, especially if you need to deliver your new car parts to your house in the fastest way possible.

Novelty items this week include the Ode To Joy and Clock Tower horns.

END_OF_DOCUMENT_TOKEN_TO_BE_REPLACED

END_OF_DOCUMENT_TOKEN_TO_BE_REPLACED
We and our partners use cookies on this site to improve our service, perform analytics, personalize advertising, measure advertising performance, and remember website preferences.Ok