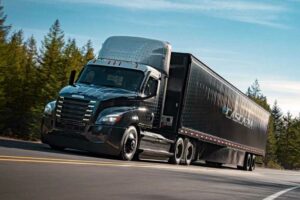 Freightliner has unveiled the production version of the eCascadia Class 8 battery electric truck after extensive testing of pre-production models with fleet customers.

The eCascadia debuted at the Advanced Clean Transportation Expo in Long Beach, California, earlier this week as an electric semi truck suited for short-haul routes that allow for depot-based charging. Ideal uses include last mile logistics, local and regional distribution, drayage and warehouse to warehouse applications.

The Freightliner eCascadia is powered by the Detroit ePowertrain developed by Daimler-owned Detroit, offering 320 horsepower in single eAxle configuration and 470 horsepower in tandem eAxle guise, and three battery options offering a range of up to 230 miles (from the largest 440 kWh pack).

According to the press release, Detroit’s Li-Ion batteries enable the eCascadia to meet its range targets without sacrificing payload, which peaks at 82,000 pounds max Gross Combination Weight (GCW).

When it comes to connectivity, Freightliner equips the truck with Detroit Connect eServices, a suite developed specifically for the eCascadia offering features that are said to allow for maximum uptime, productivity, and profitability.

For example, the Charger Management System (CMS) integrated directly into the Detroit Connect portal allows for staggered charging of multiple vehicles, charging during off-peak-demand hours, and partial charging. CMS is optimized for use with Detroit eFill chargers, but is also compatible with other popular charger models.

There’s also an eRange prediction tool that automatically calculates the range and displays it during the journey. The tool analyzes various data inputs, including vehicle parameters, load, weather, traffic, and road gradient. It also allows for testing of “what-if” scenarios and performs analysis.

Freightliner plans to start series production of the eCascadia later this year.