Home » Car Reviews » From Beater To Hi-Tech: The Technological Evolution Of Supercars

From Beater To Hi-Tech: The Technological Evolution Of Supercars 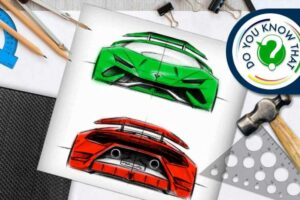 Once upon a time, supercar production was entrusted to artisans. Now teams of specialists create the masterpieces of the Motor Valley.

Creativity and ingenuity are not enough: nowadays, to produce a supercar you need a real team of experts. The days when only skilled craftsmen were involved seem long gone. But cars are getting faster and faster and, above all, safer. Here’s how production methods have changed and how the supercars of the Motor Valley are born.

There was a time when making supercars was much simpler. There were no extreme technologies, complex regulations, or even marketing. Production was mainly entrusted to craftsmen and good old “elbow grease.” One of the most important figures in this process was the “battilastra,” whose name explains exactly what they did: beat steel. They created the shapes of the car by literally beating the steel plates until the final result was achieved.

Today, getting a car out of the factory is much more complex. It always starts with a sketch, but not so much on paper as on a personal computer. Designers, however, have limits on their creativity.

In the course of their work, they have to interface with many other experts. The shapes of the car, in fact, must comply with precise rules on safety and also be studied to accommodate all the components and electrical connections in the car.

The idea comes to life

Once past the embryonic stage of the project, the car literally starts to come to life. From a file on a PC, we move on to a clay prototype and wind tunnel testing.

An aerodynamically efficient car is faster and uses less fuel. This last aspect will be increasingly relevant in the future, when the goal will be to increase the performance and range of electric cars. Ferrari and Lamborghini, in fact, have already announced that in the coming years we will see their first full electric models.

Once the “static” tests have been completed, we move on to the “marriage” between the bodywork and the powertrain. Following this, there are thousands of miles of road tests, rigorously camouflaged to “disorientate” fans and the media.

After the official presentation, it’s time for the production of the first examples and the delivery to the lucky owners. In short, Italy’s famous Via Emilia is not only the “fastest road in the world,” but also a real laboratory of innovations and technologies.