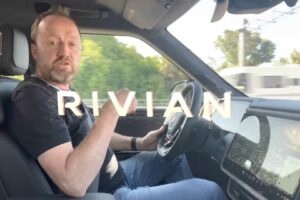 Going from a Tesla Model S Plaid to a Rivian R1T is not a very common vehicle ownership transition, but it’s a real situation for at least one EV fan from Florida.

As a result, he’s in a pretty good position to assess the R1T, especially from the perspective of a former Tesla owner. That’s actually the lens through which the above video is filmed as the R1T owner highlights the similarities and differences between the Rivian and the Tesla Model S Plaid he owned before it.

For starters, it has to be said that Nils had preorders put in for the Ford F-150 Lightning, Tesla Cybertruck, and Rivian R1T, but since the latter was the first one that became available, it’s the one he chose.

His initial impressions after driving the truck for about 300 miles are mostly positive, starting with the R1T’s perceived build quality. He says that everything on the truck feels solid and you do not have the feeling that some trim pieces are going to fall or come loose like you sometimes do on Teslas.

Similarly, the sheetmetal feels extremely solid and the bumper covers don’t look like they’re going to fall off. It really has a truck quality-type build, and the solidity of it is something that impressed this owner, especially for a brand’s first-ever production model.

Another pleasant surprise was the real-world range which gets quite close to the EPA rating of 314 miles (for the R1T with the Large battery pack and 21-inch street tires). In his experience so far, 275 miles on a single charge is a given under normal driving conditions, which is pretty good considering he never used the Conserve eco drive mode and kept the truck mostly in the All Purpose mode.

Other things Nils liked are the insane acceleration for a truck as heavy as this, the comfortable seats, great visibility, the traditional steering wheel and shifter stalk—he says he doesn’t miss the Model S Plaid’s yoke and touching the center screen to put the car in Drive—as well as the multiple settings for the drive, suspension, ride height, brake regen and more.

As for downsides, there aren’t many of them according to this owner. He lists things like Rivian’s recommendation to charge to 70% for daily driving (Tesla recommends 80% for Model S/X and 100% for the LFP battery-equipped Model 3), the app functionality lagging behind Tesla, the lack of a glove compartment, and some other minor things you can learn about by watching the video.