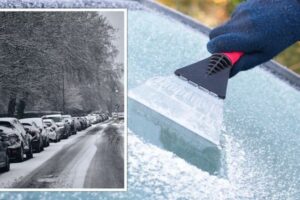 According to the Met Office “frequent snow showers and icy stretches” are expected which lead to some travel disruption as well as winds of up to 80mph. The wind, snow and ice warnings apply to northern Scotland and Northern Ireland and have been put in place earlier this week.

A further snow and ice yellow warning has been issued for Friday which encompasses large areas of Scotland, Northern Ireland and northern England.

It states: “Frequent sleet and snow showers may lead to some difficult driving conditions and disruption to travel on Friday morning”.

The Met Office warns that some roads and railways will have some icy patches and are likely to be affected with longer journey times.

It also tweeted: “A cold and frosty start for many Wednesday morning, with some icy stretches around. Stay weather aware”.

Some areas could see temperatures plummet to minus five degrees, with many warning drivers of how to stay safe with the frost.

Millions of drivers up and down the country may be waking up to frost on their windscreens this morning and can rely on a number of methods to remove the ice.

Drivers are urged to steer clear of using boiling water on windscreens to remove snow, ice or frost.

The sudden and dramatic shift in temperature could lead to the windscreen becoming damaged and could even crack.

Instead motorists can use a number of other methods to clear their windscreen before setting off.

Motorists can mix up a saltwater solution and wipe or spray it on the glass using a plant sprayer.

Alternatively, by mixing table salt and water, drivers should dunk a towel into the mixture and leave it on the windscreen overnight, which can prevent frost from appearing.

Other homemade methods include using raw onions and potatoes to clear windscreens, with some even using vodka.