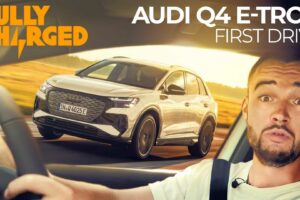 No pressure: Audi expects the Q4 e-tron to become its second best-selling model overall by the end of 2022.

Since these Q4 twins are the smallest electric Audis to date, they are also the cheapest and, therefore, more likely to sell in high numbers. Mind you, they’re not that small, as they’re roughly the same size as the Audi Q5.

That’s on the outside because the interior is roomier, thanks to the more efficient packaging of VW Group’s MEB platform for EVs that underpins them. That means the Q4 e-tron and Q4 e-tron Sportback are built from the ground up as EVs instead of using a modified ICE platform like the e-tron.

As the review from Fully Charged points out, that’s good not only for practicality but also for things people want from EVs, such as range, performance and comfort—not to mention a reasonable price.

The model in the video is the RWD-only Q4 40 e-tron, which offers a WTLP-rated range of 316 miles (508 km) from a battery with a useable capacity of 77 kWh. An AWD model will launch soon for those who favor performance over range, but this mid-range variant should please most customers.

It’s not the sportiest EV but it’s got a bit of poke as the reviewer reveals. The reality is Audi focused more on the driving experience being easy and comfortable, which is something a family car buyer wants.

Speaking of easy, the turning circle is really tight on the Q4 e-tron, which will no doubt come in handy when maneuvering it in the city. Before leaving you with the review, you should know that Audi expects the Q4 e-tron to become its second best selling model by the end of next year, so it’d better be good.