Fully Electric Chrysler 300 Replacement Due In 2026 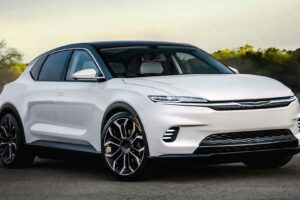 Chrysler is in desperate need of revitalization. The brand is undoubtedly lagging behind with its dated lineup. And it’s clear to see from a sales perspective – back in 2015 Chrysler sold 324,846 vehicles in the US. By contrast, last year Chrysler delivered just 115,004 cars in America. Clearly, more modern and attractive offerings from rivals are eating away at Chrysler’s market share.

Chrysler currently offers just two models: the Pacifica minivan and 300 sedan. Both are laughably dated – the Pacifica has been around for over half a decade in its current guise. A minor facelift last year and the addition of a PHEV powertrain option did little to hide its age. Meanwhile, the 300 is practically a dinosaur. The current generation 300 has been on sale since 2011. It received a small facelift in 2015 and has been the exact same since.

So, if Chrysler doesn’t want to become the next Mercury or Pontiac its obvious drastic action is required. Fortunately, the marque is now part of Stellantis following the FCA and PSA Group merger. This means it has access to a wealth of resources and funds. And Chrysler seems to be heading in the right direction. In January, the firm showed off a near-production concept, the Airflow, at CES. Named after the iconic 1930s sedan/coupe, the Airflow Concept looks great and has impressive (yet still theoretical) stats.

According to a recent report from Australian Outlet Drive, the 300 will have an electric successor in 2026 that will retain its name. Citing unnamed sources, the report suggests the 300 EV will share a chassis with a Dodge sedan (perhaps a Charger replacement?) and will run on an 800-volt architecture. The source states a range of around 500 miles may be possible, meanwhile battery size will be in excess of 100 kWh.

Whether or not the Airflow Concept will reach production as the electric 300 or an entirely separate model remains to be seen. It’s becoming more and more common for manufacturers to turn sedans into crossovers, with the Airflow Concept clearly being the latter. Just recently, Renault (another Stellantis brand) launched the Megane E-Tech. The Megane was traditionally always a sedan or hatchback, but when it became electric it also turned into a crossover. Either way, the styling of the Airflow Concept should correlate with the production 300 EV in some way, and we must admit it does look quite good.