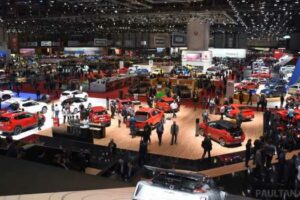 The Geneva International Motor Show (GIMS) is set to make a return in 2022, with the event set to take place from February 19 to 27, with press days on February 17 and 18. In an official release, the show’s organisers said it has begun accepting registrations from exhibitors, although they have until mid-July this year to obtain a slot.

“With the dispatch of the tender packages, we are now officially starting the organisation of GIMS 2022. My team and I can hardly wait to present our concept to the exhibitors and subsequently to the public. We really hope that the health situation and the corresponding policy regulations regarding Covid-19 will allow us to bring it to life,” said Sandro Mesquita, CEO of GIMS.

The global health crisis has certainly had an impact on the GIMS, which cancelled its 90th edition in 2020 following the Switzerland government’s decision to ban all large-scale public events last February.

Meanwhile, the cancellation of the 2021 event was announced later in July 2020, with the organisers opting to sell the show to Palexpo SA. The 2022 event that was recently announced will effectively be the 91st edition of the show.

The GIMS is traditionally one of the major automotive events on the calendar, with big brands unveiling their latest models at the show. For now, there’s no word on whether brands will be interested to sign on as exhibitors, although major marques have stated in the past that they might not participate in an effort to reduce costs.