Home » Car Reviews » Get Exclusive Hot Wheels of Roadkill’s Rotsun: Sign Up for the MotorTrend App with the Rotsun Bundle today!

Get Exclusive Hot Wheels of Roadkill’s Rotsun: Sign Up for the MotorTrend App with the Rotsun Bundle today! 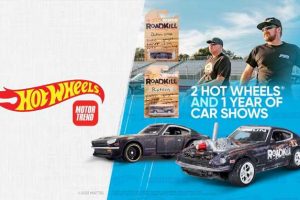 Related: New and existing MotorTrend App subscribers—sign up for the Rotsun Bundle for $44.99 and receive two exclusive and limited Hot Wheels die-cast replicas of Roadkill’s Rotsun and the 1971 Datsun 240Z, plus one year of your favorite (and the only) automotive-themed streaming service. Hurry, supplies are limited!

But don’t be disappointed: MotorTrend and Hot Wheels have partnered up to bring you the chance to own your very own die-cast replicas of the Rotsun and the 1971 Datsun 240Z that Finnegan and Freiburger started with back in episode 26 of Roadkill. Well, episode 25 if we want to get technical, but that was only a short cameo and a tiny fail compared to the pantheon of failure the Rotsun is known for.

Mike Finnegan loves the Rotsun, but David Freiburger hates it. The Rotsun never fails to fail and yet it inspires hope every time the crew digs it out for another go around—then, inevitably, breaks everyone’s heart. This rusted-out ’71 240Z barely has enough solid sheetmetal to hold it together, the junkyard Ford Power Stroke turbo is still smoking, the junkyard Mustang 5.0 V8 is still overheating, and the Nissan 300ZX rear end is still making funny noises, but Finnegan and Freiburger are going to race it at Laguna Seca against the other Roadkill garbage any way.

There’s only one place to live the saga of Roadkill’s Rotsun: The MotorTrend App. The good news is if you’re already a subscriber, you can take part in this special, limited-time offer, too! All you have to do is sign up for the Rotsun Bundle and Hot Wheels will send you these two Roadkill limited-edition die-cast replicas: The Rotsun and the more-rust-than-metal 1971 Datsun 240Z that gave birth to it. You’ll also get one year of streaming on the MotorTrend App, the exclusive home to Roadkill, Top Gear America, Dirt Every Day, and the upcoming Kevin Hart’s Muscle Car Crew (summer 2021). Supplies are limited and they’ll be gone fast, so don’t miss out!

Every Rotsun Episode on Roadkill!