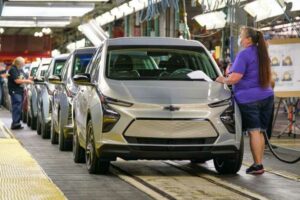 In February 2022, General Motors CEO Mary Barra said the automaker planned to deliver some 400,000 electric vehicles in North America through 2023 as part of a broader goal to make 1 million EVs in the region through 2025.

However, hiring and training delays in its battery manufacturing efforts have forced GM to reevaluate its ambitious electric vehicle production target for North America. During the Q3 2022 earnings call on October 25, Mary Barra said the 400,000 EV production goal has been pushed back to the first half of 2024, according to Business Insider. That’s a six-month delay over the original target.

The CEO added that the slower launch of cell and pack production was caused by difficulties in hiring and training 1,000 new workers at its EV battery plant in Warren, Ohio. Barra explained that it had taken “a little longer than expected” to hire and train workers at its new battery production plant, which started production in September. “It’s taken a little bit longer also from the battery pack assembly as well,” Barra added.

GM delivered strong results during the third quarter, including record third-quarter revenue and double-digit EBIT-adjusted margins. The automaker also earned more than 8 percent of the US electric vehicle market thanks to record sales of the Chevrolet Bolt EV and Bolt EUV.

“Our dealers and customers have embraced the Bolt because of its range, technology and value, helping it outsell Ford’s Mach-E by more than two to one in September,” Mary Barra wrote in GM’s Q3 2022 Letter to Shareholders.

The CEO also noted that GM is increasing Bolt EV and Bolt EUV production from 40,000 units this year to 70,000 units next year. As for General Motors’ upcoming EV models, she said the recently unveiled Chevrolet Equinox EV and GMC Sierra EV, along with the Chevrolet Silverado EV and Blazer EV, “are cornerstones of our strategy to rapidly grow EV volumes by winning in high-volume segments.”

All these models have been “incredibly well received by customers and industry experts,” according to Barra, who added that analysts see GM’s new EVs “driving rapid EV adoption and conquest sales for GM, including in coastal markets.”