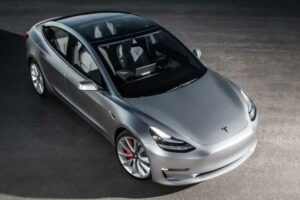 As you may or may not be aware, it’s not uncommon for automakers to have employee parking lots and public parking lots just like most facilities. Moreover, many car factories also have lots that are reserved for cars produced by the brand, and other lots for competitors’ vehicles. Finally, some automakers go so far as to have special parking lots for domestic cars and separate parking areas for foreign cars.

With all of that said, this recent story is definitely interesting, and it seems someone messed up. A Tesla vehicle was ticketed for parking at the General Motors Wentzville Assembly Plant in Missouri. The ticket was for a parking violation, and the person who issued the ticket had to check the “other” box and write a note explaining why the Tesla received the ticket.

As you can see from this photo of the ticket below, the written reason reads “foreign in domestic lot.”

Now, while this GM plant, like any other, can make rules about where people can park specific cars, the Tesla owner would have a valid argument here. A Tesla is not a foreign car. The ticket issuer could try to argue that the Tesla is “foreign” since it’s not made by GM, but that argument shouldn’t hold weight since the ticket specifies “domestic lot.”

If the Tesla was parked in a lot that was specifically reserved for GM products rather than the “competitors'” parking lot, it might be a different story. Typically, at factories and facilities like this you might find that if you drive a competing vehicle, you have to park in a lot that’s much further from the entrance than if you drive a car that’s made by the brand that runs the factory.

GM actually sent an email about the incident to The Drive. It reads:

“Wentzville, like many of our manufacturing sites, has a parking policy and designated parking locations for GM vehicles, non-GM domestic vehicles and foreign nameplates. Plant security inadvertently thought the Tesla was a foreign car and wrote a ticket accordingly.”

As the story goes, the car that was ticketed was a Tesla Model 3, and it was actually parked legally, in the non-GM domestic lot. Fortunately, the ticket doesn’t carry a fine.

The Tesla Model 3 just topped the 2021 Cars.com American-Made Index. It’s the first EV to get the honors. Moreover, the Tesla Model Y took the three spot. While GM doesn’t have any cars in the top 10 of the index, it certainly deserves credit. The automaker has 19 cars on the list, which is more than any other automaker. Honda has 13, Toyota has 12, and Ford has 11.