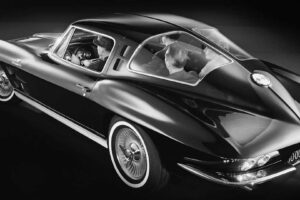 Add this to the things we now know about the Corvette.

Being as iconic as to bear the monicker America’s sports car, we all know a thing or two about the Chevrolet Corvette. Its almost seven decades of existence warrant some facts to be known and today we just learned one of those facts, thanks to GM Design on Instagram.

Apparently, GM designed a four-seat Corvette in 1962 to take up the famous Ford Thunderbird at that time. And most importantly, the Instagram account posted images of that concept, giving us a look at an official four-seat ‘Vette that never happened. See the embedded social media post below.

As you can see, this 1962 Corvette four-seat fiberglass concept was a precursor to the second-generation Corvette which would eventually be introduced in 1963. It does have the design of the C2, including the Bugatti 57 SC Atlantic-inspired split rear windshield styling. Of course, the difference lies with the availability of rear seats.

The concept didn’t reach production, though. The social media post doesn’t provide any explanation, but we’re guessing it all boiled down to business decisions during that time, including the sports car positioning of the Corvette nameplate – as opposed to the personal luxury car segment that the Thunderbird was being marketed in.

GM was pretty busy before the Corvette C2 was born. It was then that Zora Arkus-Duntov toyed with the idea of a rear mid-engine/rear-wheel-drive Corvette, which we all know has become a reality with the current Corvette C8.

With that said, can you imagine what would have happened with Corvette’s course in history if the four-seat model came into fruition? Let us know your thoughts in the comments section below.

And oh, if you’re curious, the black and white photo above was taken by Walter Farynk, GM’s chief photographer back in the day.