GM Working on Lithium-Metal Batteries, Could Achieve 600 Miles of Range 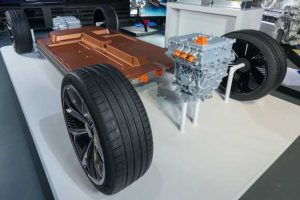 General Motors hasn’t even launched the 2022 GMC Hummer EV full-size electric pickup truck, but the automaker is already working on next-generation batteries to give its electric vehicles more range in the future. The potential breakthroughs mean an EV could be a customer’s primary vehicle in terms of range and cost, Mark Reuss, GM’s president, said.

The Hummer will be the first GM product to use the Ultium battery platform, and it will get about 350 miles of range on a full charge. But GM now says it can get about 450 miles of range for some vehicles from its Ultium batteries. The 2023 Cadillac Lyriq midsize SUV is the second vehicle due to utilize the Ultium system and is expected to get more miles per charge than the Hummer, the Lyriq being a much smaller and lighter vehicle.

Ultium—developed by GM with LG Chem—is a technical leap forward from the tech used in the 2021 Chevrolet Bolt and the 2022 Chevrolet Bolt EUV, which are the last vehicles to use GM’s older electric platform and battery system.

To take the next leap, GM is partnering with SolidEnergy Systems to jointly develop lithium-metal batteries that will power future models. Reuss announced the new joint venture at a Washington Post virtual conference. SES is a leader in lithium-metal technology and battery management software that uses artificial intelligence. GM Ventures invested in the work SES does in 2015 and this latest announcement is a further ramp-up of the companies’ working relationship.

The new batteries, technically not solid-state because SolidEnergy uses liquid electrolytes, will have twice the energy density and reduce cost by 60 percent, Reuss said. Vehicles could travel 500-600 miles on a single charge.

The two companies will also build a test manufacturing facility in Woburn, Massachusetts, to make prototypes of a lithium-metal battery by 2023.

This matters because lithium-metal battery chemistry is considered key to EV adoption. Not only does it increase range, but it reduces costs, which will make it possible for automakers to sell more affordable entry-level electric vehicles in the future.

It explains the high price of the first Ultium-powered vehicles, which start with the $112,595 Hummer EV Edition 1 truck, as well as why the Chevy Bolt and Bolt EUV continue to use older tech, awaiting the price drop that new batteries can provide.

Being smaller and lighter, the second-generation Ultium batteries could find their way into a “low-roof sports car,” (read Corvette EV) Reuss said.

“Affordability and range are two major barriers to mass EV adoption,” Reuss said. “With this next-generation Ultium chemistry, we believe we’re on the cusp of a once-in-a-generation improvement in energy density and cost. There’s even more room to improve in both categories, and we intend to innovate faster than any other company in this space.”

GM has already completed 150,000 simulated test miles with the new battery in its labs at the Global Technical Center in Warren, Michigan, Reuss said. Work on the new chemistries is “backward compatible” so future models can be updated.

GM is investing $27 billion to launch 30 electric vehicles, globally, by the end of 2025, with vehicles of all sizes, shapes, and pricepoints planned. It is converting plants to make EVs, created BrightDrop as a division for delivering goods in electric commercial vans, and is pushing to increase the charging infrastructure. The automaker would like to stop selling new vehicles with combustion engines by 2035.