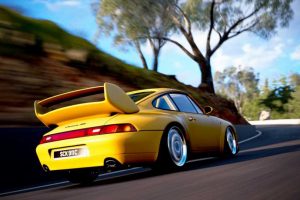 Following on from yesterday’s announcement, the v1.65 update for Gran Turismo Sport is now available.

It’s one of the largest updates we’ve seen recently, coming in at over 3GB, but — as expected — this doesn’t translate directly to new content. Instead the major focus is on the Olympic Virtual Series, which is set to get underway within GT Sport later this week.

Although the event isn’t accessible at the moment, it’s likely that the majority of the update will be dedicated to event-specific assets: video, images, liveries, or trackside decorations for whatever the qualifying event will be. According to the official Olympics announcement, the OVS is scheduled to start on May 13 in the relevant games, so we will no doubt see more on this soon.

There’s nothing else specific in the update patch notes — “various other issues have been addressed” — but there’s also a couple of changes alongside the update, both affecting Sport Mode.

Firstly, there’s a tweak to the penalty system. This will reduce the chances of getting a “severe” penalty when there’s network issue, which should help particularly in the joined Americas and Asia-Oceania regions in the FIA Online Championship. It also follows on from an unannounced penalty system change earlier in the month which seems to be slightly more strict than the previous change.

Another change that will particularly affect the FIA races is an adjustment to fuel consumption. Although the patch notes don’t specifically detail what’s changed and how, the fuel consumption rate of cars in Gr.3 and Gr.4 is now different. Early play-testing suggests lower fuel use across the board, though — quite literally — your mileage may vary.

For now we’re not aware of any other changes, though if there’s anything under the hood the GTPlanet community will no doubt dig it out in due course.