Hankook Debuts Airless Tire Concept Called the I-Flex, We Call It A Tweel 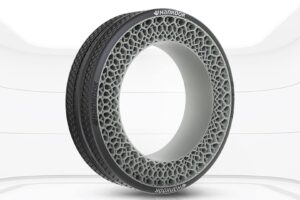 Ever since Michelin revealed the Tweel airless tire  in 2004, it has been on the radar for anyone looking to reduce the need for monitoring tire pressures for optimum fuel efficiency and tire safety—at least for applications like ride-on lawnmowers and ATVs. Looks like Hankook is the next to get in on the act with its i-Flex concept that debuted on the Hyundai Plug-n-Drive module concept at CES 2022.

What Makes The i-Flex Different?

Compared to Michelin X Tweel, the Hankook i-Flex is far more organic in its design—and that’s by design. The tire’s structure was inspired by “the cellular structure of living organisms.” According to Hankook, this allows for “better shock absorption while allowing hexagonal and tetragonal cell structures of different rigidity join together for more stable load support.”

Made For An Autonomous Table

For now, the tire design is just a concept limited to a 10-inch outer diameter, which was perfect for the Hyundai Plug-n-Drive (PnD) module that also debuted at CES. You can almost think of it as a rolling, self-driven table. “The PnD modular platform is an all-in-one mobility solution that combines intelligent steering, braking, in-wheel electric drive and suspension hardware. The single wheel unit uses a steering actuator for infinite wheel rotation.” In other words, it can turn around itself like that Lazy Susan on your table—except it’s the whole table and it can drive around. With LiDAR and camera sensors, a PnD-enabled object can move autonomously, and the PnD modules can be attached to virtually anything that needs additional mobility.

The i-Flex has been in the works from Hankook since 2010, but a production version still isn’t in sight. There are no explicit plans for building something larger than these small concept tires, but we have to imagine that Hankook is considering scaling up the concept for cars. We just don’t know how far in the future that’ll be.