Home » Car Reviews » Has BMW Run Out of Road?

Has BMW Run Out of Road? 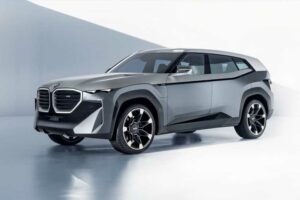 BMW started making cars in 1928, but it wasn’t until 1966 that it figured out what it stood for. That was the year it launched the first of its 02 Series models, compact, rear-drive cars that were light and agile and enjoyable to drive. The 02s—particularly the 2.0-liter 2002—helped define the E21 3 Series launched in 1975. And that 3 Series became the foundation upon which BMW was to build a singularly successful brand mantra as “The Ultimate Driving Machine.”

The Ultimate Driving Machine powered a company that was essentially bankrupt at the beginning of the 1960s, reduced to building tiny bubble cars with 250cc motorcycle engines, into a global luxury brand whose cars consistently delivered benchmark levels of performance and handling. Cars that were precisely engineered and beautifully built and, even in their most basic trim levels, celebrated the driver.

The brutalist exterior of the Concept XM has the naivety of a design school student project rather than the fully formed coherence expected from a mainstream automotive design studio. It is meant to be confronting; meant to be a concept that signposts a bold new direction for BMW. But this agglomeration of aggressive lines, contrived details and tortured surfaces looks about as sophisticated and premium as a Toyota RAV4.

I’m not sure that’s the takeaway BMW intended. But then, even BMW itself doesn’t seem entirely sure about the Concept XM. In the 110-second Concept XM video on the BMW website – a surreal Game of Thrones meets Mad Max vignette – the car itself appears for little more than 30 seconds, utterly devoid of context or explanation.

There are of course those who will argue that BMW Design has been here before, notably during the Chris Bangle era. But the majority of Bangle’s BMWs, challenging as they seemed at the time, have since proven to have been hugely influential. Bodyside sections that undulate off a crisp boneline; trunk lid bustles; swept-back headlight graphics – these Bangle design signatures were subsequently subtly appropriated and re-interpreted by automakers as diverse as Mercedes-Benz and Hyundai, Toyota and Chevrolet.

Others will applaud BMW for daring to be different. But as GM’s famously acerbic design chief Bill Mitchell is alleged to have once observed, back in the 1960s: “Walking through the lobby of the Waldorf Astoria Hotel with your flies undone is different. But it isn’t good.”

In truth, the Concept XM is symptomatic of the existential crisis facing BMW. Just as Jaguar for years made wood and leather interiors the default solution for brands that wanted to be perceived as premium or luxury, BMW set the performance and dynamic benchmarks against which whole generations of rivals were judged.

But the very characteristics that once emphatically set BMW apart are now pretty much regarded as the price of entry into the premium and luxury vehicle segment. To the point, I’d argue, where brands such as Jaguar and Lexus have abandoned what made them famous – ride quality in the case of Jaguar sedans, and refined silence in the case of Lexus – in pursuit of making their cars drive like BMWs.

It’s hard to hang your whole raison d’etre on being The Ultimate Driving Machine when pretty much everyone else in the segment is now building vehicles that perform and handle about as well as yours – and in some cases better. BMW knows its brand now needs to be defined by something else, something different.

Unfortunately, the Concept XM isn’t the answer. As Bill Mitchell would have said, it’s different. But it’s not good.