The company announced that its European headquarters will be located in Munich, Germany.

Fisker announced today that it has chosen Munich, Germany as the location for its European headquarters, named ‘Matrix’, as the company intends to produce and sell the Fisker Ocean SUV in Europe, starting in Q4 2022.

The global headquarters will be located within Continental Park at 1888 Rosecrans Avenue in the city of Manhattan Beach, California, although with Magna International selected as the manufacturing partner (and co-developer), the focus might now be more on the European market.

Production of the Fisker Ocean will take place at Magna’s Graz facility in Austria (not far from Munich), where also the Jaguar I-PACE is produced.

According to the press release, the Ocean “is poised to deliver class-leading range, functional interior space with third-row seating and overall class-leading vehicle performance”.

“The company is also announcing progress on the overall Fisker Ocean SUV program. Co-located engineering teams across the world are effectively utilizing 22 out of every 24 hours to deliver the Ocean program through its first gateway, targeted for November 2022.

Work on the advanced drivetrain is underway through a dedicated powertrain engineering team – and Fisker software designers and engineers are now running simulations for Human Machine Interface (HMI), as well as related User Interface (UI) and User Experience (UX) systems, all of which will ultimately power the unique Fisker in-vehicle and ownership experiences.”

Even more interesting news is the progress of collecting new reservations for the car, which as of today (October 26, 2020) reached 8,871.

Henrik Fisker, founder of the company, not only revealed the number, but also the progress since late 2019. It clearly shows how important were particular announcements/milestones to raise interest in this new car. 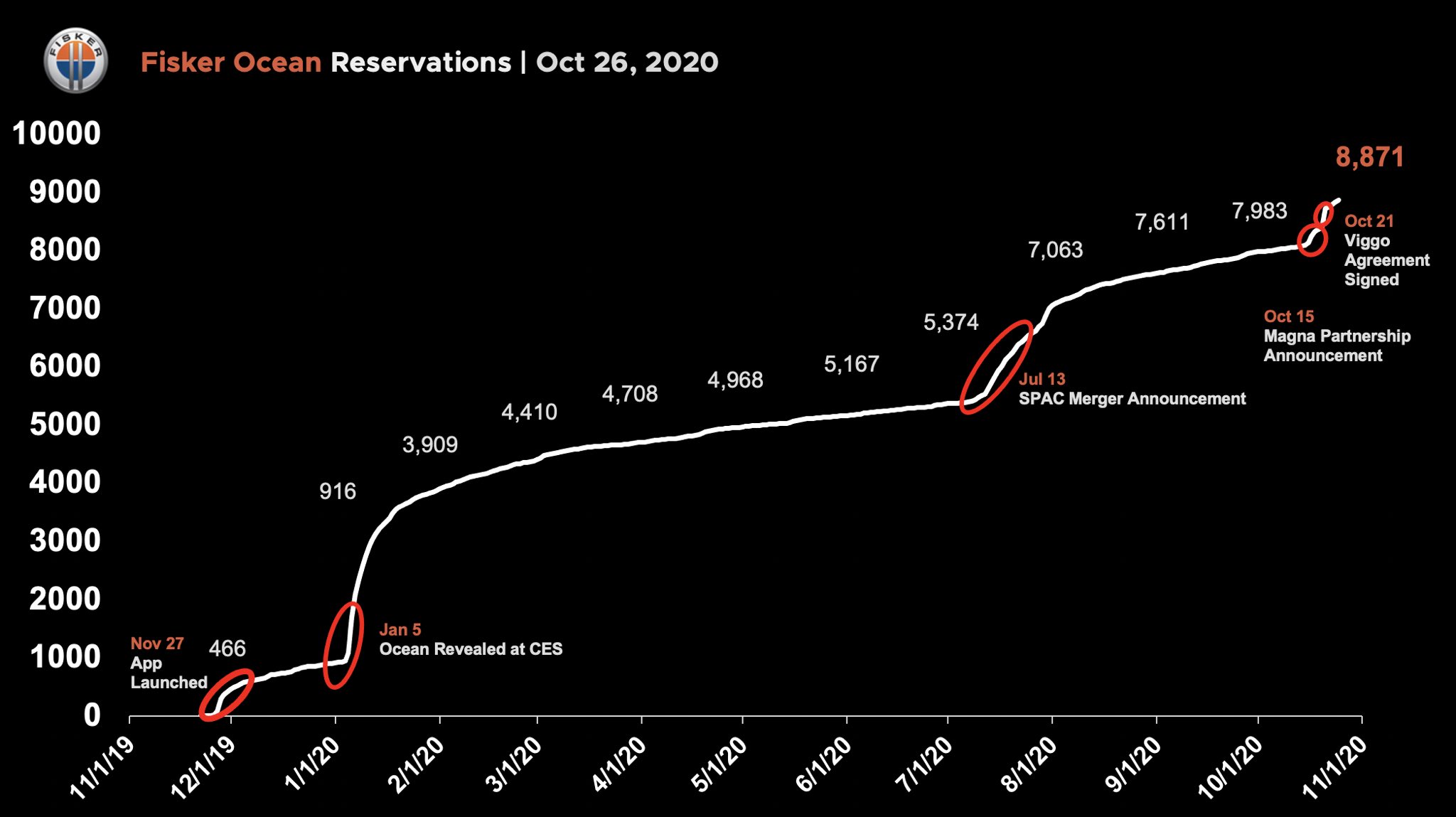 The latest major boost was an order of 300 cars by the Viggo, a ride-hailing company from Denmark.

“The substantial vehicle order agreed with Viggo in Denmark demonstrates our growth potential in Europe. Munich has long been a major global hub for the automotive industry. Locating our regional headquarters in Southern Germany will enable us to make a fast and efficient start to building our sales and distribution operations across Europe. Easy access to both the Autobahn network and alpine roads was also a consideration for validating our vehicle performance targets.”

“A shared vision for success has been quickly established between the Fisker and Magna engineering teams, which is key for enabling us to jointly deliver the Ocean, as planned, in Q4 2022. Given the uptake in European reservations, we are also accelerating the roll out of our consumer experience centers, with the first one anticipated to open in Europe in Q4 2021, also in Munich,”

Fisker Ocean specs (as of Summer 2020, before Magna deal):