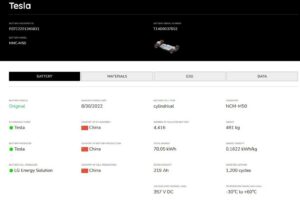 Tesla and Audi have released their first battery passport proofs-of-concept, as part of the Global Battery Alliance’s (GAB) efforts to show customers where the materials in the cells came from.

Launched on January 18 at the Annual Meeting of the World Economic Forum in Davos, the two automakers’ battery passport concepts reveal the source of the materials used in their packs, although the data is still incomplete at the moment.

Tesla’s proof-of-concept visualizes the data for the cobalt on a long-range battery pack built in China, confirming that 100 percent of the cobalt came from the Kamoto Copper Company in the Democratic Republic of Congo. But as the passport reveals, that’s just 1% off all the materials used in the pack, so there’s still a long way to go for the concept to reach full traceability.

In Audi’s two pilots, the traceability is shown as higher, with 10% and 13.6% respectively for the Hungarian and Chinese-made cells.

GAB, which is an industry group made up of over 120 businesses, governments, and other industry actors, wants to make sure that battery production “not only supports green energy, but also safeguards human rights and promotes health and environmental sustainability,” according to its official website.

The group’s efforts will eventually result in a full battery passport, which will trace everything that makes up a cell: the cathode, anode, separator, and electrolyte, noting the source of the materials, the way they’ve been processed, and whether or not the companies involved have a clean track record when it comes to child labor.

“The battery passport establishes a digital twin of the physical battery that conveys information about all applicable sustainability and lifecycle requirements based on a comprehensive definition of a sustainable battery. It aims to bring new levels of transparency to the global battery value chain by collecting, exchanging, collating, and reporting trusted data among all lifecycle stakeholders on the material provenance, the battery’s chemical make-up and manufacturing history, and its sustainability performance,” the GBA writes on its website.

You can see Tesla’s full proof-of-concept here, and Audi’s two passports are here and here.

What’s your take on this? Let us know in the comments below.