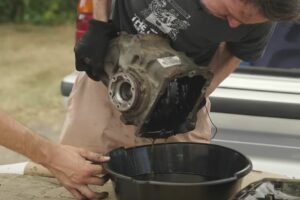 If you want to drift on the cheap, a welded differential is a good way to go about it. But before we go any further, let’s explain a few things, but feel free to skip ahead if you know all this stuff already – we won’t be offended.

A differential’s job is to allow the driven wheels of a car to rotate at different speeds. This is important for going around corners, when the outside wheel will need to spin faster as it needs to travel further than the inside wheel. The thing is, that’s not so good for drifting.

If sideways shenanigans are on the agenda and you don’t have the cash to splash out on a fancy limited-slip differential, a low-cost solution is to weld an open differential. This results in both wheels spinning at the same speed, causing the inner wheel to loose traction, making it much easier to initiate skiddy fun times. While also making the car a little unpleasant to drive around normally, particularly during slow manouvering. Worth it? That’s for you to decide.

The job involves taking out and opening up your stock differential and welding a piece of metal between the spider gears (sometimes referred to as satellite gears) which are at the ends of the axle shafts. Hey presto, the axles are now joined in a holy union of drift-friendly matrimony. Forever. Don’t forget, this is a permanent fix – change your mind, and you’ll need to fork out for a replacement diff.

The job is perhaps more straightforward than you might think. In fact, we managed to persuade resident non-car person and CT video chief Ethan Smale to have a go himself. Admittedly it took him nearly six hours to whip out the differential in the first place, and we made sure he had some expert guidance (something we’d recommend – get this wrong and you could end up with shrapnel-like bits of weld rattling around the diff), but Ethan’s welding was pretty damn good, especially for a first-timer.

As we filmed the whole thing, we can show you the whole process from start to finish. Including the bit where Ethan decided he didn’t fancy putting it back in and got Edwin and Jack to sub. We’ll give him a pass for that, considering the great work he’d done up until that point.