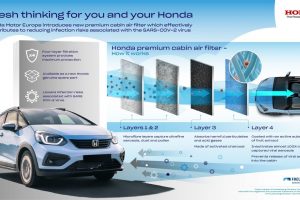 Honda has announced the introduction of a premium cabin air filter in Europe, which is claimed to reliably capture viral aerosols, germs and allergens related to significant health problems, including those associated with the SARS CoV-2 coronavirus.

This premium cabin air filter was developed in cooperation with Freudenberg, developer of filtration technologies, and is being offered as a new, genuine Honda spare part as an alternative to the standard pollen filter, says Honda.

Active protection is provided by significantly reducing the concentration of viral aerosols by using a multi-layer design that filters, captures and suppresses noxious environmental gases as well as biological and inorganic particles and aerosols, it added. Here, the first two microfibre layers of Honda’s premium cabin air filter capture most ultra-fine aerosols, dust and pollen, while the third layer is made of activated carbon, and absorbs particulates and acid gases. A fourth, bio-functional layer coated with an active, fruit extract substance inactivates the captured aerosols and prevents them from being released back into circulation in the cabin.

The performance of the filter has been proven in a series of comprehensive tests conducted with the Austrian Research Institute OFI, says Honda. Coronaviruses are spread in droplets produced when its carriers sneeze, cough or breathe, and these can remain on surfaces – and infectious – for days. Changes in wind, temperature and humidity can cause the particles to get airborne again, and here the filter can pick them up.