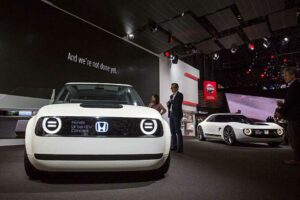 Japanese automaker Honda has a confusing EV strategy: a forked path with three prongs. It has a partnership with General Motors for two EVs that will be based on GM’s Ultium battery platform and architecture and will be built at a GM plant; another partnership with Sony will yield affordable EVs; and Honda is working on its own e-architecture for future vehicles.

In continued efforts to play catchup when it comes to electric vehicles, Honda today announced some global reorganization and the creation of a new business division to accelerate the transformation of the automaker to a more digital future.

Starting April 1, Honda Motor Co. will operate under a new global organization to accelerate its EV business and better solidify its efforts to reach carbon neutrality by 2050. A new Electrification Business Development Operations will be created to consolidate Honda’s confusing business strategy and battery electric product development that will include vehicles as well as motorcycles and other power products.

“Dave has played an important role over the past three years in helping lead the company in the face of major challenges including the COVID pandemic, supply constraints and the restructuring of our Auto Sales organization,” Diallo said in a statement. “He also helped set the direction for our digital and electrified future in the automobile sales area, which will be a major focus of my efforts in this new role.”

Honda is holding a press conference later today, and we will update if any more information is revealed.