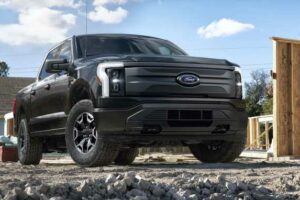 Weeks after the electric Lightning was unveiled to the public, people are still talking about it, thanks to its relatively affordable pricing and solid performance. In fact, the Lightning is set to take the title as the quickest F-150 model thanks to its estimated 4.4-second 0-60-mph time. Credit the truck’s two electric motors, which provide 563 hp and 775 lb-ft of torque. The Lightning’s well as its extended-range battery pack, meanwhile, offers an estimated driving range of 300 miles on a single charge.

How, then, did Ford manage to make the Lightning so affordable?

The F-150 Lightning’s Been a Long Time Coming

We were surprised to learn that Ford has long wanted to do an electric truck but needed a higher density battery than those it had available. “We could do passenger vehicles, not trucks,” Darren Palmer, Ford’s general manager for electric vehicles, said at the Reuters Car of the Future 2021 conference.

The Lightning relies on a pouch-style lithium-ion battery pack and the high-density cells use a nickel-manganese-cobalt cathode chemistry with particularly low cobalt loading. Ford shopped around before going with SK Innovation, which is building a new battery cell plant in Georgia. Ford is also developing and testing its own battery cells, with plans to manufacture the key components itself in the future.

It’s All About Scale

To reach its target starting price for the Lightning, Ford is leveraging the clout of the F-150—the best-selling truck for 44 years. The key to transforming a legacy business is to play to its strengths, Palmer said, which in Ford’s case is scale.

The Lightning has much in common with the regular F-150, including the overall dimensions of its cab and bed. It also uses the same seats and gearshift that folds out of the way to make room for a workspace between the seats. By keeping the Lightning’s cargo box dimension’s the same as other F-150s, Ford affords gas- and diesel-powered F-150 owners the opportunity to transfer their accessories and tools to the Lightning, should they choose to buy the electric truck.

The 2022 Ford F-150 Lightning Pro is an entry-level trim designed for commercial customers who replace about 15 percent of their fleet annually. Palmer said the same telematics from other F-150s carries over to the electric work truck.

Ford plans to build new electric vehicle components (such as batteries, motors, control units, inverters, and chargers) to scale, and it will spread these items across a number of its upcoming electric vehicles. Even better for Ford is the fact the company is making many of these new components in-house.

Additional savings come courtesy of Ford’s decision to expand the Rouge Complex in Dearborn, Michigan, which already makes other F-150 variants. The addition of a production line for the Lightning also allows Ford to tinker with the truck’s trim-specific features, such as its skateboard-like chassis and independent rear suspension. “We could modify the frame and still get a good price from suppliers,” Palmer said.