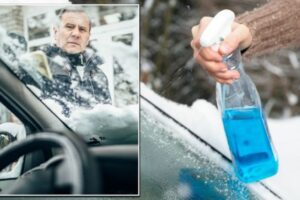 Frosty weather is upon us, with temperatures plummeting around the UK. With that comes the morning chore of defrosting your car windscreen.

Although a scraper is one of the most common methods of removing a build-up of overnight frost, it can be a time-consuming task.

There’s also the question of what to do if you don’t have a scraper to hand.

Luckily, some savvy drivers have come up with their own hacks for tackling the winter weather’s impact on their car windscreen.

Here are four unusual hacks to defrost your windscreen.

Hot water in a bag

In the event you don’t have a windscreen scraper, one driver has said the solution he uses involved a simple sandwich bag.

The driver shows how he fills a sandwich bag with hot or warm water.

He then rubs this gently across his screen to melt the ice.

However, other motorists pointed out that if the water used is too hot, it could cause your windscreen glass to crack.

A fellow Reddit user said: “I highly doubt it would happen if you just used lukewarm water.”

User Herman_Glimscher added: “I’ve saved so much time over the years using the lukewarm water method, at this point, I don’t even care if I eventually lose a windscreen to it.”

Rubbing alcohol mixed with water is cited by drivers as another way to speed up the defrosting process.

Reddit user Izzy248 described it as a “life hack that helps you defrost your windshield incredibly quick”.

The user explained: “The original hack is to get a spray bottle and mix it with two-thirds of 70 percent proof alcohol, and one-third of water.

“Simple enough. Then spray it on the windshield, leave it be for a few minutes and you should be able to rub off your windshield like nothing.”

They added: “What’s best is that this solution will not freeze, as rubbing alcohol has a freezing point of around -88 degrees celsius, which means the bottle can be kept in your car until next time.”

Flip down the sun visors

Your sun visors come in handy on bright days, but according to Reddit users, they can also help to speed up defrosting your windscreen.

User Scarycloud said: “Flipping down the sun visors will direct the air down and back towards the windshield, circulating it a bit more.

“This will help the hot air stay by the windshield longer instead of traveling along the ceiling to the back of the car.”

A second motorist also recommended putting your sun reflector to use during the winter months.

They said: “If you have a sun reflector, use that too. It will concentrate both the air and the heat from the windshield vents and minimise the air wasted trying to heat the rest of the car first.

“Bonus: It covers 95 percent of your windshield rather than the 10 percent covered by your visors.”

Use a stain remover bottle

One woman shared her “genius” hack on Facebook, which finds a new use for a stain remover bottle.

Angela revealed she uses Dr Beckman’s carpet stain remover bottle, which has a burns attachment, to scrape away the ice.

She simply fills the bottle itself with warm water and then glides the brush head over the windscreen and other frosty windows.

The brush acts as a scraper while the warm water coming from the bottle helps speed up the ice process.

In a video which she posted online, Angela said: “I’m a genius, get ya self one of these bottles, fill it with warm water and ya sorted.

“No cold hands scraping anymore and it cleans ya [sic] window screen too, the brush bit is ideal.”