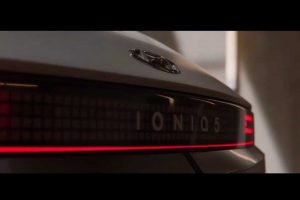 The Hyundai Ioniq 5 is about to make its official debut. The date and time was given away at the very end of the most recent video (above) teasing the all-electric crossover. If you’re in North America, be prepared to stay up very late if you intend on watching in real time.

We just recently saw the first shadowy images of the production version of the Ioniq 5. They confirm that the vehicle that reaches showrooms will be quite close to the styling of the Hyundai 45 Concept that made its debut in September of 2019. In this latest tease, it seems Hyundai was more interested in creating drama, rather than give much more away about the design of the car.

The video, which was uploaded by Korean YouTube channel 카미고 (CarMeGo), is a mini movie in which an agent is tasked with retrieving a seed from a “bio-agency ” trying to exploit it somehow. The plot is somewhat disjointed and light on details, which makes sense since all the action – there are car chases and fight scenes – happens in about 30 seconds.

The only pieces of the car we really get a fresh look at are the driver’s seat headrest and a side-vierw mirror. Although it might not seem like a lot, the appearance of the mirror is interesting, since theaser shows it wearing cameras instead of the traditional mirrors.

Word of the new teaser video came to our attention after it was posted on the InsideEVs Forum by member Kendalf. They also raised an interesting point while sharing the video and, separately, the official thumbnail for the footage, which shows the rear taillight section of the car.

Says he, “The video does provide some additional views of the front and rear lighting. I’m particularly intrigued by the rear pixel lighting, which spans across the entire rear. Up to now we still haven’t seen any except for the brake light portion lit up, so I’m very curious what the other LED pixels will be used for?”

Great observation and good question: what are all those lights on the back for? Will it be customer configurable? Will they all light up red under extreme braking? Might they all shine white light for guidance while reversing? Tune into hyundai.com/worldwide at the time above and maybe you’ll get answers.

If you, like us, need every minute of beauty sleep you can get, just come over to InsideEVs on the morning of the 2nd and we’ll have all the details published and ready to digest with your breakfast.