Hyundai Ioniq 5 N Spied In A Parking Lot, Has Bucket Seat For Driver 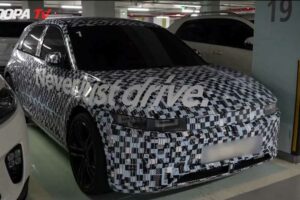 The Hyundai Ioniq 5 N is an exciting vehicle from the brand. Its foray into electric vehicles is spawning several new models, including N performance variants, and Hyundai isn’t leaving its new compact crossover on the sidelines. The Ioniq 5 N isn’t a well-kept secret, but there’s still a lot we don’t know about it. A new Woopa TV YouTube video gets close to the new electric five-door, dissecting the design visible through the camouflage wrap.

While Hyundai tries to hide the crossover’s styling, an up-close inspection reveals a few details. The N’s front bumper is completely different, with a larger opening spanning the bottom. The face likely features other changes that differentiate it from the non-N variant. The video also reveals the crossover wearing large, 21-inch wheels.

The rear is well covered, but the crossover should receive unique styling elements that could include special lighting graphics. The crossover also sports a roof spoiler, and there should be other sporty styling cues.

The video also provides a peek at the crossover’s interior, revealing a familiar-looking cabin with a few tweaks. For one, the front seats are mismatched. The driver gets to sit in a sporty bucket seat, which could be an available option for the model. The steering wheel is also different from the standard Ioniq 5, and looks like it came from the Genesis GV60.

Hyundai hasn’t released any information about the powertrain, but we expect it to be similar to the Kia EV6 GT. The Kia packs a 577-horsepower (430-kilowatt) dual-motor setup that sends the crossover to 60 miles per hour (96 kilometers per hour) in 3.5 seconds. The Kia has a 162-mph (266-kph) top speed. The Ioniq 5 N should also receive the automaker’s larger 77.4-kilowatt-hour battery pack for improved range – or more high-speed blasts.

Previous rumors had suggested that Hyundai would release information about the model sometime this month, but there has been nothing official yet from the automaker. We would hope to see the performance crossover debut before the end of the year, but it’s anyone’s guess as to when that could actually happen.