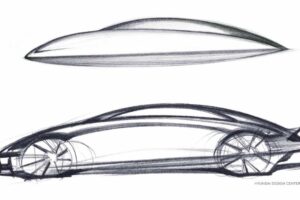 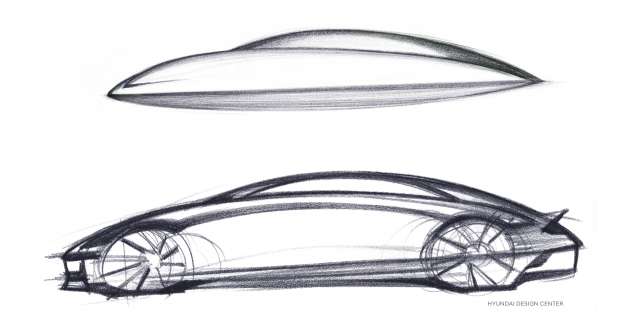 The Hyundai Ioniq 6 that was teased last week – albeit without showing its actual form – will be the next addition to the manufacturer’s line-up of fully electric vehicles, and now the company has released a concept sketch of the upcoming EV, offering more of what goes into the eventual car’s aesthetic.

An Ioniq 6 development unit has actually been sighted running road tests in February this year, wearing what appears to be a more productionised body compared to the Prophecy concept shown in March 2020 that offered inspiration for the upcoming car’s design.

While the sweeping lines of this just-released concept sketch may appear to be a bit of a regression, considering that the development car has already been sighted, that remains under camouflage, and the sketch could still offer a glimpse at what will be the eventual production car.

As suggested by the look offered by the previous teaser, the lines which are to form the upcoming Ioniq 6 are quite a departure from Hyundai’s recent full-EV offering that is the Ioniq 5, here instead wielding smooth curves that arc along the length of the concept’s body. By contrast, the Ioniq 5 that is on sale employs the sharp lines and edges from the 45 concept.

So far, we know that the upcoming Ioniq 6 will use the E-GMP dedicated EV platform as used on the Ioniq 5 as well as the Kia EV6 and the Genesis GV60, meaning that its architecture will support fast charging via DC outlets with support for rates of up to 350 kW. In those cars, recharging the battery from 5-80% takes just 18 minutes at the highest DC charging rate, and a similar figure can be expected for the Ioniq 6.

Likewise, the Ioniq 6 will likely mirror its Ioniq 5 sibling in terms of powertrain configurations on offer, which is comprised of single- and dual-motor layouts offering RWD and AWD. With the largest battery capacity of 77.6 kWh specified, maximum range is tipped to be around 482 km.

So, here we have it – the Electrified Streamliner idea has been put to paper, so to speak, and as mentioned before, the Ioniq 6 appears set to offer a contrasting look alongside its stablemate the Ioniq 5. More will certainly be shown of the Ioniq 6 in due course.