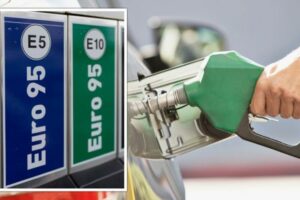 When E10 petrol launched onto forecourts in September, the Government heralded the change, saying it was a “greener” fuel. It said E10 would not be more expensive at the pump than current standard petrol.

It continued saying E10 petrol can marginally impact fuel economy, although this would generally only be around one percent.

Other factors like the weight of the car and the driving style are more likely to have a bigger impact on the fuel economy.

Despite this, many have seen their fuel economy drop dramatically.

A driver on Twitter, using the handle duncanda51, said they had seen a large reduction in the efficiency of their car.

They wrote: “Hello peeps. Been on a weekend return drive from Edinburgh to Liverpool.

“So E10 is to reduce CO2, but consumption is up, thereby negating any CO2 saving.

“Have I got this ‘green’ project correct?

“I’ve worked out that if I use higher priced E5 fuel and can get back to my normal mpg, I’ll actually save money.”

Latest data from RAC Fuel Watch shows that the price of petrol has dropped slightly from its peak in November to an average cost of 146.75p per litre.

In comparison, super unleaded can be bought for 158.91p per litre, although this price, along with petrol and diesel, is expected to fall.

The RAC has called on UK supermarkets like Asda, Tesco, Sainsbury’s and Morrisons, as well as retailers to pass on cost savings to motorists when they can be made.