Home » Car Reviews » If You Want These Supras, You’ll Need to Win the Lottery

If You Want These Supras, You’ll Need to Win the Lottery 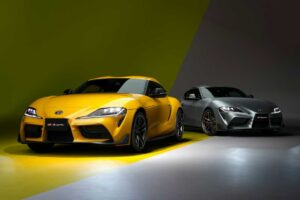 You blinked and just like that, Toyota’s Supra is celebrating its 35th birthday (as a standalone model; the first two generations were known as the “Celica Supra” abroad, and “Celica XX” at home.) And rather than a party, Toyota cooked up a pair of special edition models in very limited numbers for the JDM crowd.

After its run as a super-Celica, the Supra became an import performance legend in its own right in the 1990s, powered by the legendary 2JZ I-6 with modified versions often producing ungodly amounts of power. When sales slowed for the fourth iteration of the Supra, Toyota pulled the model from the U.S. market entirely in 1998, though it continued to sell overseas until 2002. In the second-hand market, eager buyers and a mountain of aftermarket support have driven prices of fourth-generation Supras up. Way up.

The Supra returned in 2019, controversially co-developed with BMW and lacking a third pedal entirely. As expected, the enthusiast circle was divided and within that group, it’s been an uphill battle for acceptance. Among the average buyer in search of a sporty, turbocharged, front-engine/rear-drive option, sales have remained strong enough to keep production rolling and even introduce a four-cylinder version at a lower cost.

To commemorate the nameplate’s 35th anniversary, Toyota unveiled two versions of the modern Supra, both fitted with minor extras. The I-6 powered RZ is only available in Matte Storm Gray Metallic and with just 35 models being produced, buyers will need to enter a lottery for a chance to purchase one. It should be noted that the suggested price is about $71,000 U.S., but retailers are able to adjust pricing as they see fit.

The additional cheddar for the RZ, if you won the lottery, would get you bright red leather seats and matching red inserts on the leather-wrapped steering wheel and a carbon fiber plate that runs along the passenger-side dash front showing off a GR Supra 35th anniversary badge. A wireless charging hub, which sits just beyond the gear selector, was also added.

In the case of the SZ-R (fancy talk for four-banger), there are five color options available, all of them topped with matte black mirror caps, and again, limited to just 35 total models produced. Here, the seats get a two-tone treatment, and again, the carbon-fiber-backed anniversary badging and an updated steering wheel are installed. Also, an “organ type sports accelerator and gas pedal,” as Toyota refers to them, are included. Suggested pricing on the SZ-R is about $59,800 U.S.

The wheels for both versions of the anniversary edition are 19-inches and painted matte black, and both get larger red-coated brake calipers. Unlike the fourth-generation Supra anniversary edition back in 1997, there are no signs of exterior badging to flex on lesser Supra on the road.