Jaguar Land Rover returns to profit in Q3 despite pandemic 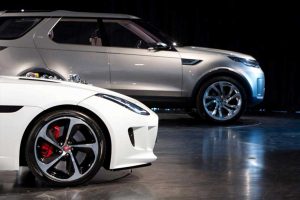 Jaguar Land Rover has issued its financials for the third quarter of this financial year, revealing a pre-tax profit of £439 million from September to December 2020 despite the effects of the coronavirus pandemic and Brexit.

That figure is the best third-quarter performance Jaguar Land Rover has on record, showing a £121 million improvement over the same period last year. It’s also up by £374 million from Q2, when the UK was under its first coronavirus lockdown.

However, JLR’s sales are yet to make a strong recovery. The firm shifted 128,469 vehicles in the third quarter, and while that’s a 13.1 percent improvement on the second quarter, it’s still nine percent behind the firm’s sales performance from Q2 in the 19/20 financial year.

Like most businesses, JLR has had a tough few months. The brand posted a £501 million loss at the end of the 19/20 financial year, which was followed by a further £413 million loss in the first quarter of the current financial year.

To manage the losses, JLR ramped up its Project Charge cost-cutting initiative in March 2020, and the firm hopes the programme will save a total of £2.5 billion by the end of March this year. The scheme saved the firm £400 million in Q2 20/21 alone.

There are pockets of growth, though. Sales in China showed a 20 percent improvement over the previous quarter and a 19.1 percent improvement year-on-year. The Land Rover Defender also enjoyed a 66 percent increase in sales, with more than 16,000 examples finding homes in the last quarter alone.

Jaguar Land Rover hopes it can continue this sales drive with its rapidly expanding range of electrified models. Over the last year, a series of updates have brought the firm’s number of electrified vehicles to 20, with eight plug-in hybrids, 11 mild-hybrids and the pure-electric Jaguar I-Pace making up the portfolio. 12 per cent of sales in Q3 were fully electric or plug-in hybrid.

JLR will also soon expand its pure-electric line-up with the new XJ saloon, next-generation Range Rover and a larger SUV, called the J-Pace. All three cars will sit on the company’s freshly developed MLA platform, which is compatible with battery packs as large as 100kWh.

Thierry Bolloré, Jaguar Land Rover’s newly appointed CEO, said he was “encouraged” by the Q3 figures. He continued, stating: “This performance is a credit to the outstanding efforts of the employees of Jaguar Land Rover to overcome many challenges this year and I would like to thank every one of our colleagues for their contribution, particularly those who are working safely in our plants and facilities.”

JLR also remains optimistic about the coronavirus vaccination programme and the UK’s trade agreement with Europe, despite the additional administration it brought. Bolloré said: “Looking ahead, these challenges continue, including the Covid pandemic and its impact on the global economy, the UK’s new trading relationship with the EU and the significant technological changes taking place in the automotive industry.

“In this environment, I’m working with my management team on plans to realise an exciting future for Jaguar Land Rover, which I look forward to sharing in due course.”

Now read all the latest news on the upcoming Jaguar J-Pace. Let us know your thoughts in the comments section below…