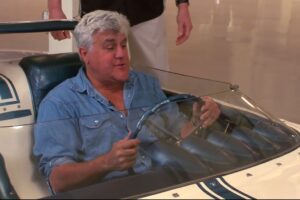 Former late night host and automotive celebrity Jay Leno has been seriously burned in a vehicle fire, TMZ reports. He received burns to the left side of his face and was admitted to the burn ward at Grossman Burn Center in Los Angeles.

TMZ reports Leno was in his Los Angeles garage, where he films most of his internet videos for the show “Jay Leno’s Garage,” when a vehicle he was working on suddenly “erupted into flames without warning.” It’s unclear which vehicle started the fire.

Leno confirmed the fire and provided Variety with a statement regarding the incident: “I got some serious burns from a gasoline fire. I am ok. Just need a week or two to get back on my feet.”

His exact condition is unknown, but the fire “did not penetrate his eye or his ear.” News of the injury broke when organizers for The Financial Brand conference said Leno had to cancel due to a “very serious medical emergency.” TMZ reports Leno has canceled all engagements for the rest of the week, at least.

This is a breaking news story and will be updated as more information becomes available.